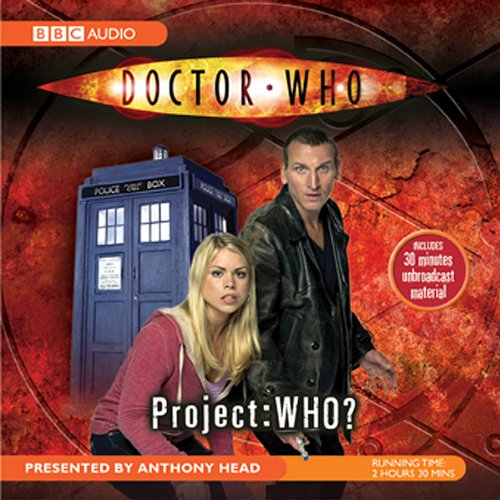 Christopher Eccleston and Billie Piper are amongst those talking exclusively about the smash hit 2005 TV series Doctor Who in this BBC Radio 2 documentary, presented by Anthony Head.

Project: Who? goes exclusively behind the scenes of Doctor Who to discover how the action-packed new BBC1 series was made, with award-winning writer and executive producer Russell T Davies at the helm.

Featuring new and exclusive interviews with the cast and creative team, the programme examines why the BBC decided to launch the new television series now, nearly a decade after the Doctor's last small-screen adventure. It also explores how the format of the show was developed for a new audience, how the character of the Doctor was cast, and how his adventures are launched and marketed around the globe.

Christopher Eccleston and Billie Piper - who play the Doctor and Rose - talk about their experiences on the new series, along with executive producers Julie Gardner and Mal Young, writer and executive producer Russell T Davies, writer Mark Gatiss, director Joe Ahearne, producer Phil Collinson and many others.

Anthony Head, of Buffy the Vampire Slayer fame, presents this fascinating journey into the exciting dimensions of Doctor Who. This audio also contains an additional 30 minutes of material not included in the BBC Radio 2 broadcast.

Must listen for any Doctor Who fan

This is set in the first year if the reboot. But is so interesting. I could not stop listening

What made the experience of listening to Doctor Who the most enjoyable?

Lots of interviews with the producers, writers and actors.

There was a lot of behind-the-scene information that I didn't know previously.

This is an informative BBC Radio Broadcast filled with behind-the-scenes information as well as fascinating interviews with the producers, writers, and actors of the first season of the new incarnation of Doctor Who.