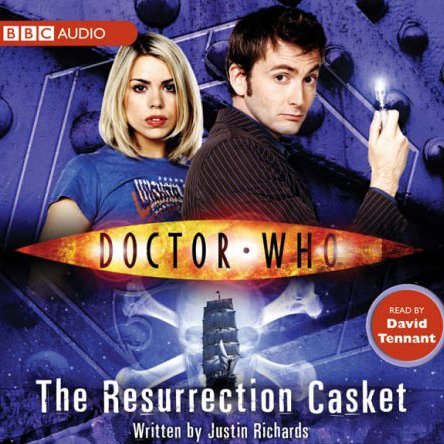 Starfall: a world on the edge, where crooks and smugglers hide in the gloomy shadows and modern technology refuses to work. And that includes the TARDIS. The pioneers who used to be drawn by the hope of making a fortune from the mines can find easier picking elsewhere. But they still come... for the romance of it, or old-fashioned organic mining. Or in the hope of finding the lost treasure of Hamlek Glint, scourge of the spaceways, privateer, adventurer, bandit.

Will the TARDIS ever work again? Is Glint's lost treasure waiting to be found? And does the fabled Resurrection Casket, the key to eternal life, really exist? With the help of new friends, and to the horror of new enemies, the Doctor and Rose aim to find out.

Featuring the Doctor and Rose as played by David Tennant and Billie Piper in the acclaimed hit series from BBC Television. Written by Justin Richards. Read by David Tennant. Includes author interview by David Darlington of Doctor Who Magazine.

"Tennant tells the story with such energy and feeling... This is a splendid combination of history ¿ a crew of pirates and a search for lost treasure ¿ and science fiction ¿ the pirates are aliens and the treasure will bring, you¿ve guessed it, world domination." ( The Times)

My fav of Tennants narrations

Pirates and Doctor Who, how can you not love that!This is my favorite story of the tales narrated by David Tennant.

Tennant's voice talent really comes into this audio, as there are so many different characters and he does a different voice for every one of them. He will be truly missed on the show! I hope he continues with these narrations, as other past actors who have played the Doctor do.

Another Excellent Doctor Who Audiobook

In Doctor Who: The Resurrection Casket, Justin Richards drops The Doctor and his faithful companion Rose into an environment where (with few exceptions) technology more advanced than steam-powered will not work. The resulting low-technology world, and significant suspension of disbelief, provides an excellent backdrop for this re-working of Robert Louis Stevenson's masterpiece Treasure Island.
I found the story highly entertaining and David Tennant's reading flawless. I especially enjoyed the voice selected for Kevin, kind of a cross between the original Marvin from Hitchhikers and Sully from Monsters Inc (huge and apologetic).
If there's a downside with this audiobook (and this one is extremely minor) it's that I now feel compelled to re-read the original story.

Pretty good story, a little predictable at times but enjoyable. Nice to hear Tennant reprise his role for these short stories that feel like two part episodes.

Awesome story, really good characters, great adventure. One of my favorites. If you're looking for a fun, quick, exciting Doctor Who classic, this is it. Worth it again and again.

David Tennant is a voice over rock star wow!!! I hope maybe someday audible does a Doctor Who special with DT and Billie Piper, but for now this little adventure-mystery will do nicely! Pretty kid-friendly btw!

Rose is smarter than all that!

Those story was spooky and Tennant was as fabulous a narrator as ever. Would have a been a 5 star listen for me if Rose had had more to do.

If you miss the 10th Doctor listen to this! David Tennant narrates in his native Scottish accent, reads the Doctor in his British accent & voices all the other characters. Delightful!

A treasure hunt is always a nice way to start a story. Filled with pirates the rough life that goes with them. This is a beautiful story that leaves you surprised and happy by the end. I recommend this highly.

Lots of places you can’t help smiling
Rose is not developed a lot
Not a deep or deeply moving story
But a nerdy steampunky quirky hoot of a story that holds you -
Kevin is brilliant
DT IS WONDERFUL and drags you with him on a romp and drops you off satisfied
I could listen to him read the phone book
If you are a DT fan, you will enjoy it

I loved the twists and turns of the plot as I floated somewhere between the Doctor's genius and Rose's realizations. Loved it!

This was the first Doctor Who audio book I got. It was gripping. The story is excellent and suitable for all ages. The detail given is perfect, not too much, just the right amount so you can see it clearly in your mind. David Tennant brings the story alive; he does lots of different voices brilliantly. His ?Rose? is just right. You can listen to the story many times and each time get something new from it. This story will get you hooked to Doctor Who audio books, especially those read by David Tennant!

love this story! mixture of pirates of the Caribbean and doctor who! David tennant brings the story to life!

Another extremely nostalgic Doctor Who audiobook today, not as well memorised but all came back to me within the first half hour.
Good fun and well written, but it's a stretch to call it an homage/ based on Treasure Island- it's very much the same story just with robots and space. Not that that isn't enjoyable, I'm just mostly amazed I never noticed as a kid.

loved the story, the narration & pretty much the whole thing. cant wait for the next book.

Doctor who, what can i say.

This doctor who story was great. Its a story of pirates meets scary monster in the future. Having David Tennant read the audio book was great and you think you are watching the series on tv, but you are just listening to the audio book. You will not believe what happens at the end, but you never know what happens at the end because its doctor who. This is my first doctor who audio book and it will not be my last. 5 out of 5 because it keeps you on the edge of your seat. And listen to it all in one listen because you will not be able to turn it off.