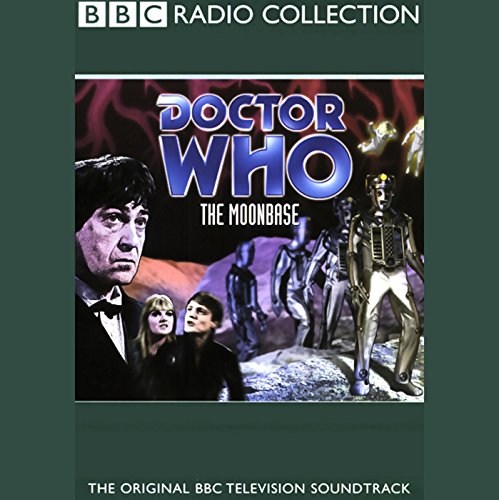 Patrick Troughton plays the second Doctor in this four-episode adventure from 1967, set on Earth's moon and featuring a return appearance by the emotionless Cybermen.

The year is 2070, and Earth's weather is controlled by a device called the Gravitron, based on the Moon and manned by an international team of experts. The TARDIS arrives to find the base in the grip of a plague epidemic which is drastically reducing the personnel. Before long an even greater menace is proved to be responsible: an invasion force from the planet Mondas, home of the Cybermen....

The soundtrack presented here includes linking narration by Frazer Hines, who played Jamie in the story itself. It includes the only surviving versions of episodes 1 and 3, whose film recordings no longer exist in the BBC Television Archives.

Playing alongside Patrick Troughton and Frazer Hines are Michael Craze as Ben, Anneke Wills as Polly, and Patrick Barr as Hobson.

Wish all the old episodes were available like this

These features, which combine the soundtrack from the original episode with what they call "linking narration" (AKA someone talking over the quiet bits to describe what's happening) are a great way to enjoy the Doctor Who program - they make me feel at least some of what it must have been like to watch these episodes on TV as a child, and since there's no video, the special effects are as good as your imagination can contrive.

amazing. too bad it's missing

Where does Doctor Who rank among all the audiobooks you’ve listened to so far?

it ranks the second best, only the slightest millimeter behind 12 doctors 12 stories.

What was one of the most memorable moments of Doctor Who?

i like any scene with the cybermen. there voices are perfect

i don't exactly know. but like i said, the cybermen are fantastic

it made me gasp in horror at the idiocy of bbc's decision to earase it, or any other doctor who story, for that matter

all doctor who is amazing. exept the sixth doctor. he's just blghfrtfh.

A real classic. The Cybermen will become to Second Doctor, what the Daleks were to First Doctor. His big bad guy. They will make three more appearances in Troughton's series, while the Daleks will only appear twice. The second Doctor will make one more trip to the moon one more time after this. The story Seeds of Death. A great story and great audio.

Cyberman voices detract from the story

Harder for me to follow because of the Cyberman voices but I enjoyed the Doctor and Jamie as always. I'll have to listen to it a few more times.

What the Doctor ordered

This is a fantastic balance of original audio track tied in with narration. It works surprisingly well. The original audio is a little...deteriorated, but otherwise I felt like 10 again, which is when I first saw the episode.

This cheeky little romp sees the Cybermen make their second ever appearance menacing astronauts on a moonbase. There is so much to love here, with great performances and the combination of your imagination with Frazer Hines' narration probably creates a far more engrossing image than the original TV show!

All your moonbases are belong to us

Out of this world

One of the best doctor who story's I love listening to this :-) a must for everyone who loves sci-fi