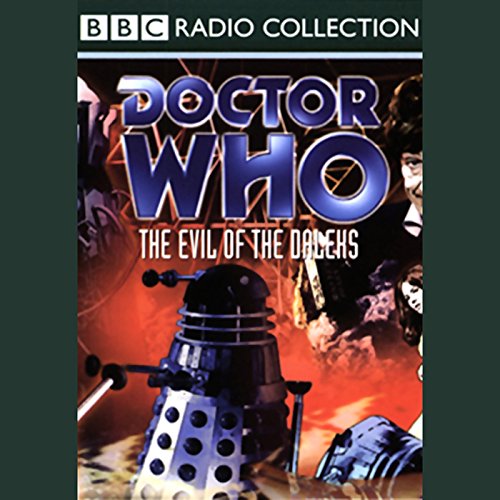 Patrick Troughton witnesses 'the final end' of the Daleks in this exclusive recording of a classic 'lost' BBC television adventure, with linking narration by Frazer Hines.

The TARDIS has been stolen from Gatwick Airport, and the Doctor and Jamie are hot on its trail. A series of cryptic clues lead them to an antiques shop owned by Edward Waterfield, and there it becomes clear that an elaborate trap has been laid for them; but by whom, and for what purpose? Only a journey back in time to the 1860s will reveal the answer...

The Daleks are in search of the Human Factor, something which they believe will help their quest for universal domination. In order to achieve their aim they need the Doctor's help, and the use of his TARDIS.

The Daleks' plan has far-reaching consequences, leading to conflict and destruction of astonishing proportions.

Frazer Hines, who plays Jamie in the story, narrates this classic story from 1967, of which all but one episode is now missing from the television archives.

i only wish I could have experienced this as a child.
the final battle must have been something special to see on TV .

Is it the end of the Daleks?

Of course not. They will return to menace more Doctors in the future. This was a classic story. Great action and suspense. The Doctor gets a new companion Victoria Waterfield. This was a great Dalek story. The Doctor gives them a bad beating. Great stuff.

Doctor Who The Evil of the Daleks

Patrick Troughton at his best, along with the rest of the companions. awesome story written too.

This one has several layers of indirection and so many irrelevant characters and subplots that I actually forgot one until I went to write this review. By the end, I was slogging through it more out of a desire for completeness than an interest in the story. It felt like there were no real stakes and the characters weren't really engaging, not even the Doctor and Jamie. Try it if you like, but don't blame me if you end up tearing your hair out in frustration.

The partly missing story of the Daleks

If you could sum up Doctor Who in three words, what would they be?

The best doctor who story in the entire histroy of earth

What was one of the most memorable moments of Doctor Who?

What about Patrick Troughton and full cast ’s performance did you like?

I wouldn't have to make it a film just find the missing episodes of this story (1,3-7 if you didn't know)

A great dalek story. It never lost my attention. Hopefully they'll make an animated version of this story as well

dr who evil of the daleks

This is simply one of, if not the best Dr Who Daley story of all time. Perhaps it have even been slightly improved with the use of your own special effects!

a wonderful dalek story that has you on the edge