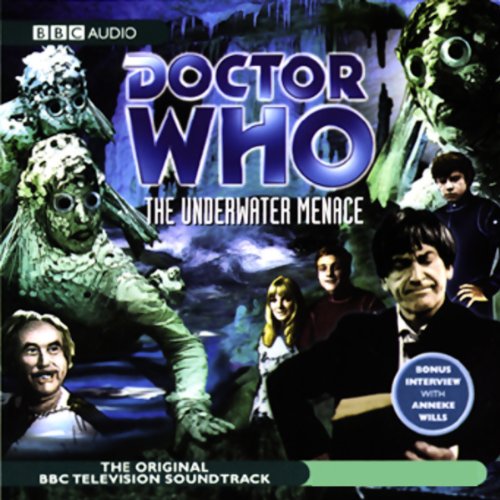 Patrick Troughton stars as the second Doctor in this 1967 adventure, which finds him stumbling across the lost city of Atlantis.

The TARDIS arrives on an extinct volcanic island, beneath which lies a fantastic subterranean world inhabited by the primitive Atlanteans. The Doctor and his companions move from the frying pan to fire when they are rescued, from death at the jaws of hungry sharks, by the mad Professor Zaroff, whose plans involve nothing less than the destruction of the whole world.

Ben and Jamie are sent to work in the mines, and Polly looks set to be transformed into a water-breathing Fish Person unless the Doctor can intervene. Will the travellers be able to engineer the revolution which is needed to save Earth?

This long-awaited release also features a bonus interview with Anneke Wills, who played Polly in the story and who also provides linking narration for the soundtrack.

"You're Nou Turning ME Into A Fish!!"

For a story of that kind on DOCTOR WHO, it wasn't as bad as others made it out to be. Sure, the sets and some of the acting was campy (Especially from Joseph Hurst. who later hammed it up in the James Bond film, DIAMONDS ARE FORVER). but when listening to the audio restoration by the incomparable Mark Ayres, one can imagine, as did Anneke Wills, aka Polly, who narrates this presentation, what Atlantis could have looked like if the show actually had a budget. The sound, originally from an off-air recording by Graham Strong, who around 17 or so when he recorded this and others by hooking a wire into the telly itself, is excellent! A plus is that it marks Fraser Hines (his second appearance) first story as a companion after originally being introduced as a one-off character in the previous story, "The Highlanders, which is sadly still lost, save for the audio. For me, it was fun to listen to..

nice entry in Dr.Who. steady performance by everyone. Polly is strong presence in story. well done. recommend this book to everyone.

A strange little story. It's also a little goofy. The Doctor and crew discover Atlantis and try to stop one of the most craziest mad scientists to be in a Doctor Who story from destroying the world. It was hard to visualize some of scenes in the audio, because some of it needs to be seen to be believed. I hear when it was televised some of it looked tacky. Maybe it's best we can't see it and we must use are imagination to make it look better. Can hardly wait to listen to the next story.

Get this with the DVD

Or you can just forget the DVD and listen to this audio alone, and the pictures in your head will be way better than anything they managed to put on screen in the 60s.

With the BBC destroying the video recordings of most of the Troughton era it's refreshing to know that some can still be enjoyed on audio. An exiting episode with your imagination taking you further on a journey than perhaps the TV episode could.