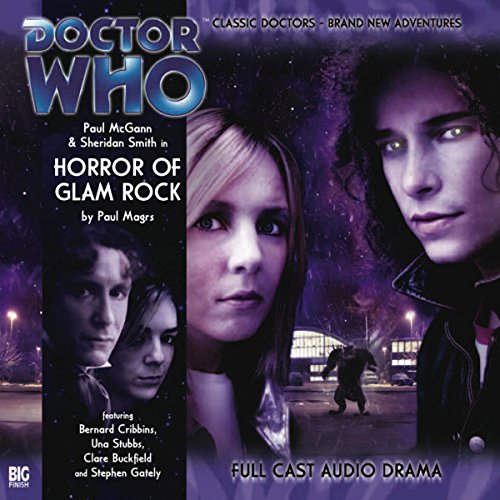 The Doctor and Lucie go glam when the Tardis makes an unexpected landing in 1974. Slade, The Sweet and Suzi Quatro are Top of the Pops - and brother-and-sister duo The Tomorrow Twins will soon be joining them, if the star-making Svengali Arnold Korns has his way. But will their dreams turn to dust at a service station somewhere on the M62, besieged by a pack of alien monsters?

Featuring the song 'Children of Tomorrow' sung by Stephen Gately and Clare Buckfield, with music by Tim Sutton and lyrics by Barnaby Edwards. This release also includes bonus interviews with the cast.

What listeners say about Doctor Who - Horror of Glam Rock

I love the Eighth Doctor and Lucie Miller, but this audiobook was a bit of a disappointment. The acting was good, the basic plot was average, but the monsters were underdeveloped and really confusing, the characters got all jumbled up and the book in general didn’t make much sense.

Not the best - intriguing though

I think it is safe to say that though this had a star cast, the overall story was a bit weak and the actors not used to the full. That said I liked Una Stubbs character, but the others came out a bit one dimensional.