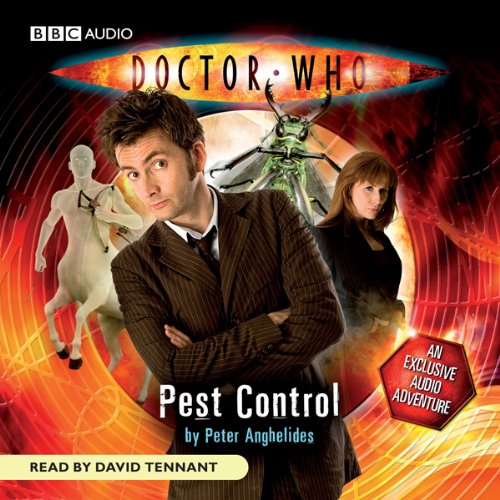 This Audio Original story is exclusively available from BBC Audiobooks, and is not available in print form or as TV episode. Pest Control is the first such Audio Original, an exclusive adventure read by David Tennant.

The Doctor and Donna face monstrous insects and a ruthless robot exterminator in this thrilling, exclusive audio story.

The TARDIS is lost in battle on a distant planet. When the Doctor sets off in pursuit, Donna is left behind, and finds herself accepting a commission in the Pioneer Corps. Something is transforming soldiers into monstrous beetles, and she could be the next victim.

Featuring the Doctor and Donna, as played by David Tennant and Catherine Tate in the hit series from BBC Television, this story has been written specially for audio by Peter Anghelides, and is read by David Tennant, with additional music and sound effects.

What listeners say about Doctor Who: Pest Control (Unabridged)

What a wonderful story! Peter Anghelides took on a great task in capturing the manic brilliance of the Doctor and the sarcastic demeanor and wit of Donna Noble and he has done a fantastic job! The story kept me intrigued from the start. The reading by David Tennant has by far has got to be one of the major highlights for me. He captured the voice of each character wonderfully. The music and sound effects only added to the drama. I hope to hear more stories like this in future Doctor Who novels.

Fantastic, a must listen!

Unlike the other Doctor Who audio books, this one has a soundtrack and sound effects which completely adds to the fun story line. The only thing missing is this story actually being made into an Doctor Who episode.

What can I say about my favorite Doctor narrating this tale? David Tennant has such great talent! He does various accents (The ones with American accents are the bad guys, hmmm) for each character, you can tell which is female, which male, which alien, etc. He reads with such excitement you can tell he is as much of a Doctor Who fan as we the listeners (and viewers) are. Makes you wonder why he is leaving the show?

Even if you've read the book, you've got to listen to this just to hear the excitement in David Tennant's narration, the soundtrack and the special effects.

A must for any Doctor Who fan

I love Doctor Who, and I especially love David Tennant. He's an excellent narrator and the story was great!

Where does Doctor Who rank among all the audiobooks you’ve listened to so far?

This is a great adventure from the Doctor-Donna era. It is an entertaining story and true to form.

The Doctor is of course the well played by David Tennant.

Have you listened to any of David Tennant’s other performances before? How does this one compare?

As with the other books read by David Tennant, The Doctor is well played, but he also does Donna very well (Oi!).

When you are at war you had better know who your enemy is.

If you are a Doctor Who fan, waiting for the next instalment, this definitely scratches the itch.

I've listened to this story through twice. It was a bit confusing at first because there are a lot of characters and a number of actual or potential villains, and I don't always concentrate fully when I listen to audiobooks (i.e. my confusion was not the fault of the story or the narration). The first time I was a bit disappointed because the Doctor and Donna are separated for a lot of the story. But the second time I knew that was going to happen, so I really enjoyed their little bickering conversation at the beginning, and how they dealt with the separate and somewhat bewildering situations they each found themselves in. The story was quite interesting as it unfolded. I anticipated certain plot developments but others came as a surprise. I absolutely loved the Doctor's speech on what he will and won't bear. It is classic, pure Doctor.

Tennant does a brilliant array of accents, including American and Russian, and of course it's a delight to hear the Doctor's dialogue in the Doctor's own voice. There are excellent sound effects for certain of the creatures. Overall, really great!

I have to wonder what Cathrine Tate thinks...

I really love this story. It's cute and a little bit weird. Not as clever as the average Dr. Who script, but not terrible. David Tennant is one of the best audiobook readers I've ever heard. The way he swaps between accents is seamless, and his Donna Noble voice is spot-on, and hilarious. The reading is entertaining enough for the price. I don't usually use my credit on short audiobooks, but I've listened to this twice, and I really enjoyed it.

IT WAS A RELIEF TO BE RELEASED OF DUTY
The best part of this is, the Doctor Who Music. Even though this had Centaurs, giant robots, evil scientists and giant insects, I was bored. There is more to writing a good story than throwing a bunch of science elements together.

While David Tennant is entertaining, as always, the story & characters felt flat and did not capture my interest.

For anyone who can’t get enough of the 10th Doctor! David Tennant does a great job with the narration, really giving voice to all the characters.

Ugh I cannot listen to this because it won't download so annoying! UGHHH UGGHHH UGG

David Tennent demonstrates his incredible capacity to draw in the listener with his voices; impressions, humour and excitement in his storytelling.
We played this in the car on a long trip and my 11 year old and me stayed in the car park listening to the last dramatic minutes of ?Pest Control?...I?m addicted to audio books now!! FANTASTIC story - if not a litle gruesome at times:)

I knew it would be good because David Tennant was the narrator and he is excellent at doing different characters. He does Rose and Mickey well, I hoped he would Donna well too and he did. I didn't like the music and sound effects,they just weren't needed, they didn't add much to the narration. The storyline was good, I couldn't stop listening until the end of the story. It was a typical plotline, but that didn't take anything away from the story.

Great, worth listening to