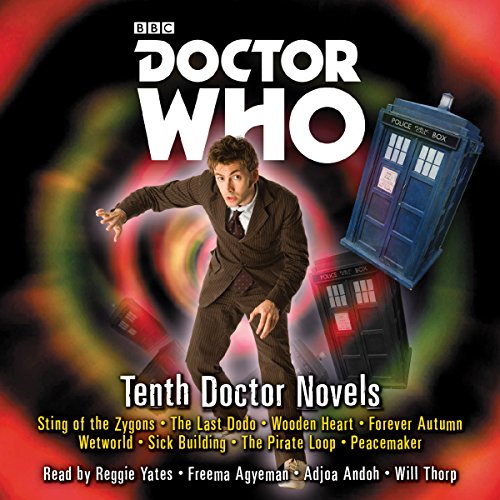 Freema Agyeman, Reggie Yates, Adjoah Andoh and Will Thorp are the readers of these eight original stories featuring the 10th Doctor and Martha, as played on TV by David Tennant and Freema Agyeman.

The titles are; Sting of the Zygons by Stephen Cole, The Last Dodo by Jacqueline Rayner, Wooden Heart by Martin Day, Forever Autumn by Mark Morris, Wetworld by Mark Michalowski, Sick Building by Paul Magrs, The Pirate Loop by Simon Guerrier, and Peacemaker by James Swallow.

What listeners say about Doctor Who: Tenth Doctor Novels

Got this as my first Audible purchase as an avid Doctor Who fan. However it was super difficult to get through the first story, predominantly due to the awful narration of Reggie Yates. This was completely the wrong work for him to do. Inflections in the wrong place, lack of space and differentiation between character dialogue, and strange accents (including, most notably, a French character that sounds Jamaican). All of these things combine to make the first novel a slog to get through. Don't get me wrong, he's a great actor, but perhaps not a great narrator.

It also doesn't help that the Zygon story was very average - this put me off of the rest of the collection. I'll stick to the Big Finish audio dramas in future.

Lengthy collection of Dr who stories to keep fans amused. My son thoroughly enjoyed them

A couple of the stories were good. But most I just couldn’t connect with I did like when they had the actors read the stories. Some I just cannot follow along with.

I greatly enjoyed this collection of Doctor Who stories. I have always loved the Tenth Doctor and Martha Jones I thought they had a great chemistry together and that comes through in these stories. I have listened to other stories that Freema Agyeman has voiced and she always does such a great job! The others were also good except for Reggie Yates, I had a hard time distinguishing between the various characters as the way he voiced them was odd. Other then that I loved pretty much all of it!

It was so wonderful to hear stories of my favorite incarnation of the Doctor again.

I have always liked Martha and 10th .I'm very glad that they created the audiobooks with them together.Highly recommend

Each story was incredibly gripping and was excellently read. I can’t say which story was my favorite because as I got into the next one, it was just as good as the last. I recommend this audiobook very highly.

Loved all the stories and the narrators were great, especially Will Thorpe. Lots of stories for the price of the audiobook too.

An enjoyable listen, must read for any Doctor Who fan.

An enjoyable group of novels, well read on the whole with intriguing storylines.

A good story, well written and engaging. Reggie Yates doesn’t even try to do the Doctors accent which helps you stay in the story - well done.

The Doctor and Martha land and soon discover a monster has washed up in the Lake District, 1909. Hunters, naturalists, and even King Edward VII are congregating, in the hopes of finding the other Beast of Westmorland.

The story itself is very good, I didn’t particularly like the writing style but it might’ve been better to read rather than listen to. Freema Agyeman is a good narrator and again doesn’t bother too much with accents, helping you to stay in the story.

Life forms are becoming extinct so fast it’s becoming difficult for the teams of the Museum of the Last Ones to keep up. These special teams each transport themselves to specific coordinates to collect the last of a species before they are truly extinct.

The Doctor asks Martha where she wants to go and she says the zoo - the Doctor suggests going somewhere more interesting than the zoo. Martha wants to see the Dodos and luckily the Doctor has a dodo feather. Using the feather to guide the Tardis, the Doctor takes them to see the last Dodo - and finds himself in the Museum!

The curator, and manager of the museum, is determined to capture the last of every species to ensure they never become truly extinct... and the last of the Time Lords has just landed in her museum.

Will she complete her collection, or will the Doctor save all the animals?

It’s an okay story, you definitely get a bit of a horror vibe to begin with. Adjoa Andoh is an okay narrator- sometimes she would try an accent that wouldn’t work but on the whole good.

The Doctor and Martha land on an abandoned ship. As they walk around they find mummified corpses trapped behind cell doors. Soon they decide to stop checking and find a control room.

As night turns to day aboard the science vessel, life forms appear as if from nowhere. Obviously this will need investigating.

They find themselves in a forest, a forest that has monsters prowling the edges.

Can the Doctor find out where, and how, the forest and the town have appeared before the next child disappears? And can they find their way back to the ship, and the Tardis aboard her?

Forever Autumn
Written by Mark Morris
Read by Will Thorpe

It’s Halloween, and the aliens under the town of Blackwood Falls, New England, have awoken. Not surprisingly, the Doctor and Martha land in time to discover the mystery and to help.

In the roots of an ancient tree, a young man has found a book called the Necris - and the aliens want it back! With their power reserves low, the Hervoken control different objects and creatures, from cats to rubber bats, as they try desperately to get the Necris back.

Will the Doctor be able to face down this ancient race, thought to have been purged from the universe by the Eternals?

Colonists are building on the planet called Sunday. It seems perfect, if a little wet and swampy. Unfortunately the Doctor loses Martha and the Tardis into one of the swamps.

The Doctor meets Candice, who takes him to the settlement to find a way to get the Tardis back. He discovers they have Otters caged and are running experiments on them.

As ever, there’s more going on than meets the eye, and soon the Doctor must face a slimy alien who’s attempting to populate the universe with itself.

Sick Building
Written by Paul Magrs
Read by Will Thorpe

Well written story that will keep you wondering most of the way through. Very enjoyable, though the end is a little weak. Quite well read.

The Doctor and Martha land on a planet that is about to be devoured by Voracious Craw. They soon meet a boy named Solin who takes them back to the Dreamhouse. The house is full of his fathers inventions, robots made from every day items and tasked to serve the family.

After delivering the warning, the Doctor and Martha are told to stay overnight at the Dreamhouse. The Doctor decides to go back to the Tardis in the middle of the night. He’s caught by the family and the servers, and the head of the family, Tiermann, sends him deep underground where he can’t tamper with the shields again.

But everything isn’t as it seems the computer seems to have a mind of it’s own. And the creator? The creator only has enough room to take himself his wife and his son away from the planet before it’s destroyed.

Can the Doctor stop the robots from harming humans? Or can he save the planet from the invading Voracious Craw?

I love the storyline but I didn’t like the way the story would follow one character, then jump back in time to follow the other characters timeline and story. Perhaps reading this one would be better than listening to it for me, though it’s a thoroughly enjoyable story. It didn’t feel like a proper ending to the story which is a shame. Freema is as good a narrator as ever.

A ship called ‘The Brilliant’ went missing, a mystery the Doctor has always wanted to solve. He takes Martha to the ship and the hi-jinx begin.

They land in the engine room, and find the trans-mat in use and the door blocked by a scrambled egg type substance. After resonating it with his screwdriver, he sends Martha through, planning to follow just behind her.

Martha meets Gabriel, a server on the leisure craft. He escorts her to the cocktail lounge where Martha meets the other passengers and their captors.

But where’s the Doctor? What has happened to the crew? And why when you look away from the food platter does it refill with canapés?

Peacemaker
Written by James Swallow
Read by Will Thorpe

A good story well written very engaging. A very enjoyable narration by Will Thorpe. This story seems to be from the very, very, beginning when Martha first met the Doctor so I would actually recommend reading it before the rest of them.

The Doctor and Martha land in a town in the wild West. The town has been ravaged by the smallpox yet there were very few fatalities. A healer came through not long ago and managed to prevent the deaths of everyone in town.

The survivors, who were helped by the healer are having nightmares though. Nightmares about flying steel and laser beams. After searching for what the healer had used to save the town, and the source of the nightmares, the Doctor is coming up empty. He’ll need to meet the man behind the miracles.

There are others searching for him to. Men with alien weapons who will stop at nothing to find him.

But who is the healer? How did he heal them? Another mystery for the doctor to find out.

not the best of the 20th Doctor stories but not bad. 2 strong narrators, 2 less engaging.

Love the Doctor Who novels

I loved the narration and perfornance, however I felt it was hard to finish, weaker stories