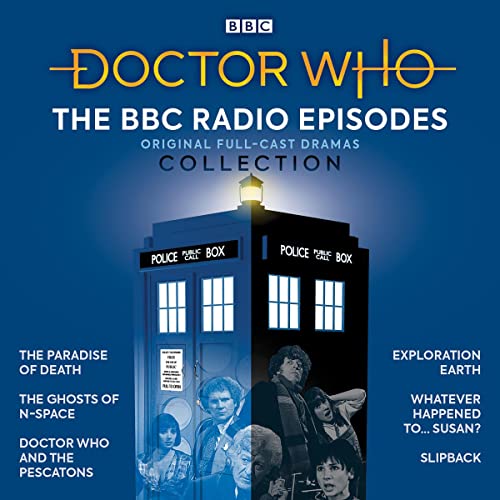 A new edition of the collection featuring each of the Doctor's full-cast BBC radio adventures—and more.

In The Paradise of Death and The Ghosts of N-Space, the Third Doctor reunites with Sarah Jane Smith and UNIT for adventures on Earth and beyond, first broadcast on BBC Radio in the 1990s.

In Doctor Who and the Pescatons, made for LP release in 1976, the Fourth Doctor and Sarah fight alien invasion on present day Earth.

The duo return in Exploration Earth: The Time Machine, for BBC Schools Radio, in which they witness the Earth's early development.

Whatever Happened to...Susan? is a tongue-in-cheek look at how Susan Foreman's life might have turned out after her adventures with the Doctor, and Slipback is a full-throttle adventure for the Sixth Doctor and Peri, first broadcast on BBC Radio in 1985.

Also included in this new edition is a 45-minute conversation with Elisabeth Sladen, recorded exclusively for BBC Audio in 2004.

What listeners say about Doctor Who: The BBC Radio Episodes Collection

I enjoyed the heck out of this audiobook for sure . Any whovian would I think

Listening to the entire book, the interview at the end seemed more interesting. Not sure who the doctor is.

Everyone seems kind of similar sounding

Tv for your ears and mind

enjoyed it immensely. and would recommend this to all Dr Who fans and sci fi fans alike

wonderful stories from the classic eras, with lovely performances by all, including several talents no longer with us today. definitely worth a credit.