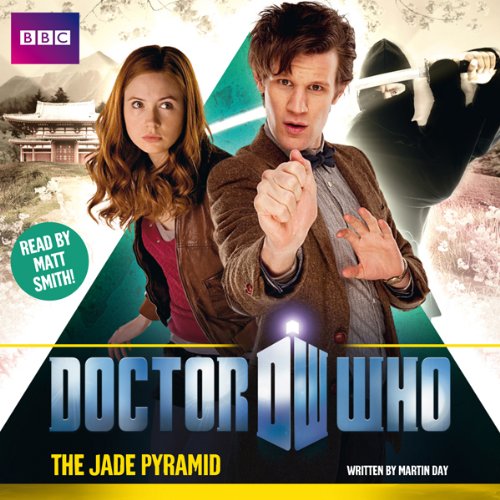 Doctor Who: The Jade Pyramid

Intercepting a distress call, the TARDIS is drawn to a Shinto shrine in medieval Japan, where the Doctor and Amy are met by village elder Shijô Sada. He explains that the ogre-like mannequins surrounding the holy site are harmless guardians, called Otoroshi.

At the heart of the temple is an ancient jade pyramid, so sacred that only the monks may look at it. But the Shogun, the ruler of Japan, wants to possess the pyramid and has ordered seven samurai and a band of soldiers to come to Kokan and seize it.

Whilst the Doctor is tracked by a ninja assassin, Amy discovers what happens to trespassers at the shrine. Soon the secrets of the jade pyramid - and the towering Otoroshi - will be known... Written specially for audio by Martin Day, The Jade Pyramid'is read by Matt Smith, who plays the Doctor in the acclaimed hit series from BBC Television.

What did you love best about Doctor Who: The Jade Pyramid?

The sense of peace and thematic symmetry. This had an unusual twist on the typical expectations for a doctor who story, and I liked the sense of humans learning from past mistakes through legend.

What other book might you compare Doctor Who: The Jade Pyramid to and why?

This is really strongest in contrast, because it does things that you don't usually expect in a doctor who story.

Which character – as performed by Matt Smith – was your favorite?

For some reason, this was the kind of book I really liked that I kept pausing. It's something to pace out and savor.

This has an interesting sense of tranquility about it, and it's neat to see religion not portrayed as a ploy for an evil alien for a change.

Matt Smith does a wonderful job narrating. References are made to previous shows, some prior to Smith playing the Doctor. Whovians should give it a go, it's a nice break from watching previous episodes in between seasons.

love matt smith, story is short but decent. But I love all things Dr Who and really loved Matt Smith.

Doctor Who in samurai Japan.

Matt Smith as the Doctor in a rousing adventure in medieval Japan. Aliens, samurai and adventure galore.

Love this story, great for a quick who addiction fix. Matt Smith does a great performance.

Yes - it's quick, and a good in if they aren't used to listening to audiobooks.

What does Matt Smith bring to the story that you wouldn’t experience if you just read the book?

The voice of the Doctor always adds a special touch when listening to DW audiobooks.

Hate to say it, but Matt Smith is not the vocal actor that David Tennant is. He doesn't do a terribly impressive job with his vocal characterizations, and it's hard to hear the difference between him as narrator and him as Doctor. And the story is just.... lame. Straightforward. Dependent on luck rather than any skill. And the surprise is kind of a so-what. Why is any of the important stuff here, in this time and place? Why's it important? How is it supposed to connect to the overall story or the distress signal that supposedly lead the Doctor and Amy here? This doesn't really tell us anything. Go get a different episode.

I loved Matt Smith as Doctor Who, but Matt Smith's narration here was as flat as an overnight coke

I love Doctor Who. I love Samurai. I love stories set in old Japan. Take all that plus Matt Smith's brilliant narration and you've got a brilliant listening experience though I'll admit he reads almost to quickly but if you can keep up it should be no problem

I loved the Jade Pyramid especially as it was read by my favourite doctor, Matt Smith :)

The adventure is ok, the characters a little forgettable - some standard Doctor Who trope, a wise older character, a misunderstood dark character who turns out to be noble etc. What saves this for me is the wonderful narration by Matt Smith. He clearly is very excited to be the Doctor still and enthusiasm helps to move a story along - although his voice for Amy is pretty dire!!!