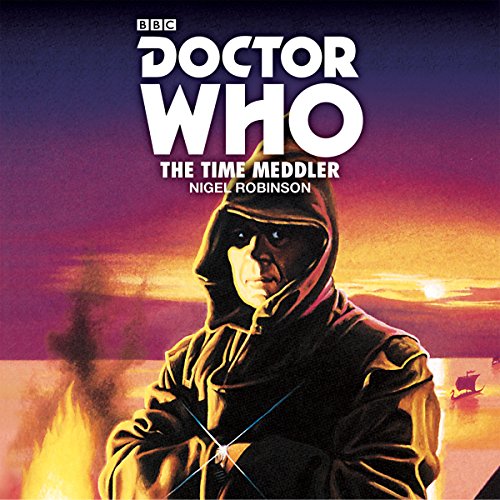 Doctor Who: The Time Meddler

An unabridged reading of this classic novelisation featuring the First Doctor and the Meddling Monk.

When the TARDIS materialises on an apparently deserted Northumbrian beach, Steven disputes the Doctor's claim that they have travelled back to the 11th century. The discovery of a modern wristwatch in a nearby forest merely reinforces his opinion.

But it is 1066, the most important date in English history, and the Doctor's arrival has not gone unnoticed. Observing the appearance of the TARDIS is a mysterious monk, who recognises the time machine for what it is. He also knows that the Doctor poses a serious threat to his master plan - a plan which, if successful, could alter the future of the entire world....

What listeners say about Doctor Who: The Time Meddler

This story is the one in which the Doctor meets one of his kind for the first time in the original series. Though the name of the Doctor spices known as the Time lords hadn’t been invented yet. The monk as the time lord is known is not as evil as the Master, but is just as as smart as the Doctor. It’s really interesting in how the Doctor deals with the monk in the end. The Doctor proves you can destroy an enemy without using violence. You have to listen to find out the Doctors method . The monk returns in the epic Daleks Masterplan. But after the Daleks adventure is never seen on television again. I think he appears in Doctor Who novels, but I don’t know their titles.

Classic Who With A Fantastic Narrator

What made the experience of listening to Doctor Who: The Time Meddler the most enjoyable?

A combination of the audacity and comedy in the writing (translated faithfully from the screen by Nigel Robinson), and the ridiculously good narration and characterisation by Peter Purves.

Purves is the undoubted stand-out of this release. Not only does he give faithful voice to his own companion-character, Steven Taylor, he has a more than decent stab at everyone else, including Vikings, Northumbrians, and Maureen O'Brien's Vicki. But the great revelation (at least if you haven't already heard his work in the Big Finish audio stories), is Purves' rendition of William Hartnell's First Doctor. While Hartnell was a powerful presence on screen, Purves delivers a version of him that does far more than taking you into the story - he makes you quickly believe that he IS the First Doctor, which anchors you in the world of the story very firmly.

Everything about Purves' performance enhances this audiobook - his First Doctor and his faithful replaying of Steven Taylor particularly, but (as Purves himself has said before now), much of his career over the last few decades has been filled with audio work of one kind or another, and that expertise comes shining through every second of this telling. In retrospect, it's rather a shame that other Target novelisations of his period, including The Myth Makers and The Gunfighters (both of which worked very well in print), were delivered by other narrators, as Purves would be a solid go-to narrator for all First Doctor stories of his period, because you get more than your money's worth from his performance across the board.

Absolutely - The Time Meddler is a story that encourages single-sitting consumption in any case: someone beggaring about with history, with added Vikings. But Purves' performance (it's diminishing to call it a reading) makes it a story you can certainly listen to at a single gulp, given the free time.

The Massacre was pretty hard going on screen, but on the strength of The Time Meddler, and of Purves' delivery in particular, that's one I'll be investing in shortly, so this audiobook resulted in two sales.

great, loved it my favorite character out of all Doctor Who is the Meddling Monk

A good doctor who book

A good book for any doctor who fan (like I am)!!!! A bit confusing at times but a still a great story line. Also a bit repetitive at times and slightly gory at one point. Still a brilliant 1st doctor who book!!!