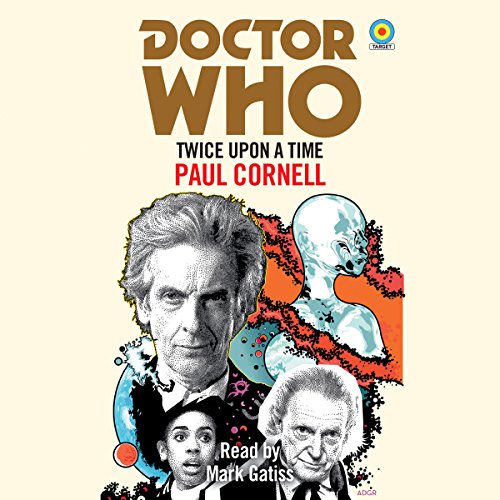 Doctor Who: Twice Upon a Time

Mark Gatiss reads the brand-new novelisation of the Twelfth Doctor’s dramatic final adventure. Still reeling from his encounter with the Cybermen, the First Doctor stumbles through the bitter Antarctic wind, resisting the approaching regeneration with all his strength. But as he fights his way through the snowdrifts, he comes across the familiar shape of a blue police box and a mysterious figure who introduces himself as the Doctor....

Thrown together at their most vulnerable moments, the two Doctors must discover why the snowflakes are suspended in the sky, why a First World War Captain has been lifted from his time stream moments before his death and who the mysterious Glass Woman is who knows their true name. The Doctor is reunited with Bill, but is she all she seems? And can he hold out against the coming regeneration?

Doctor Who: Twice Upon a Time first published by BBC Books in 2018

Much better than the episode

As a First Doctor fan, I was really excited when I first heard about "Twice Upon a Time." Imagine my disappointment when, much like in "The Five Doctors," he was written to be more sexist than he was during his own era. The idea that Barbara, Vicki, Sara Kingdom, Dodo, or Polly, much less Verity Lambert, would have tolerated that sort of thing is laughable.

I tried this audiobook chiefly because I heard from fellow fans that it fixed a lot of the episode's issues, and for the most part that's true. While the out of character comments are still there, Paul Cornell has the Twelfth Doctor acknowledge that they're out of character, which helps. Cornell also spends a significant part of the book getting into the motivations of both Doctors, Archie, and Bill so that we understand why they're acting like they are, which gives the story a lot more depth. Obviously, he's someone who has written a lot of Doctor Who and I really appreciate the little Easter eggs, both from Twelve's era and earlier ones, he slips into the story. The book keeps the good parts of the episode and builds on them, making an even more heartfelt and enjoyable version. We even get to learn what happened to Bill and Nardole after "The Doctor Falls."

Mark Gatiss does a stellar job with all the voices, but particularly with the First and Twelfth Doctors who are both pretty spot on. All in all, this audiobook is definitely worth listening to, even if the episode wasn't one of your favorites.

Big fan of doctor who. This was amazing. Never expect anything other then good content from the Doctor who

This was absolutely brilliant! loved the story itself and the amazing performance by Mark Gatiss!
The scene of the battlefield on Christmas made me cry (as it always does).

A must for fans of the Doctor

This adaptation of the 12th Doctor's farewell episode is as much a tear jerker as it is a love letter to both thr fans and to Peter Capaldi. Gaittis, who plays the first instance of the Family Lethbridge-Stewart in the last episode of the 12 th era, captures the naivete of the First Timelord and the gruffness of the Twelfth adding the nueiances one can only guess at when watching the episode. He successfully captured all of the characters from Bill Pots to Clara.
I'm looking forward to listening to other booms from the 12th era.
Laugh hard, run fast, be kind...words to live by

This was read well by one person. The narrator is Mark Gatiss the soldier in the story the doctors are trying to save. He did a good job reading the story and you could tell when he was moving from person to person and it was a nice flow. Some people can not read doctor who books! I would read another book read by Mr. Gatiss.
The story itself was known to me as I saw it on TV when it first came out and have watched it again several times. I loved the interactions of the two doctors. I find myself laughing several times thru the story. Bill’s interaction with the doctors was amazingly written.

Great job of reading the novel. Complete with sound effects and different chartacter voices. The narator really nails Peter Capaldis voice inflections and tone. It also goes inton a little more detail, like most do, of the feeling of the Doctor and why he is really ready to "Doctor, I let you go".

This story possesses excellent narration and represents one of the best stories in the entire Doctor Who series. A true gem and treat for fans of the series and great storytelling in general.

The multi talented Mark Gatiss is a superb narrator if this tale. His ability to play all the parts with such subtlety is genius. The story flew past and I was genuinely disappointed when I realised there were no more chapters. So I listened again.

An good story with excellent narration and some sound effects that enhance the experience. Short but worth it.

a fitting end for the 12th Doctor

Narrator performed quite remarkably providing almost indistinguishable accents to the respective cast. A very enjoyable story which kept me hooked till the very end

If you have never heard of Dr Who,Start here.

Ok,so lets start with the negative. Paul Cornell occasionally tries to be clever and breaks the 4th wall. Personally I hate that. for example, the video copy of the Dalek Masterplan, the Daleks would lover to get hold of a copy because they have lost theirs... Please don't do this. Breaking that wall brings you crashing out of the narrative, Its not funny, not clever and not right.

That out of the way, this is a fantastic novelization. Mark Gatiss perfectly captures the tone and the spirit. The dialogue sparkles and the additional background that Paul Cornell brings is beautifully judged.

Doctor Who: Twice Upon a Time Review

I loved this audio book very much and it has a great voice in Mark Gatiss.
By Orkneyislands