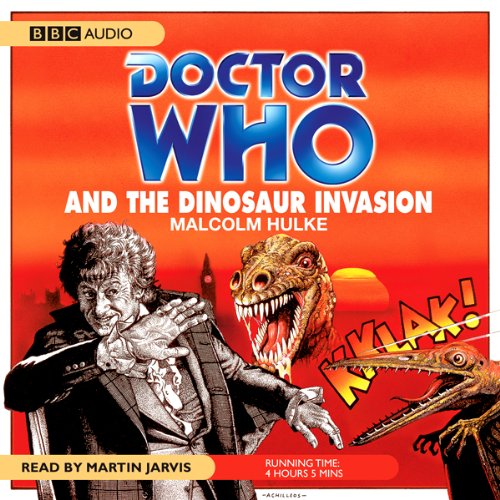 The Doctor walked slowly forward into the cul-de-sac. The giant dinosaur turned its head to focus on the midget now approaching...The Doctor aimed his gun to fire...suddenly from behind came a great roar of anger. He spun round, blocking the exit from the narrow street towered a Tyrannosaurus Rex, its savage jaws dripping with blood.

The Doctor and Sarah arrive back in the TARDIS to find London completely deserted: except for the dinosaurs. Has the return of these prehistoric creatures been deliberately planned and, if so, who can be behind it all?

"They're well-written books: adventure stories of course, but with some thought...the creation of the character of the Doctor had a touch of genius about it." ( Westminster Press)

What listeners say about Doctor Who and the Dinosaur Invasion

The story makes no sense for the first hour and I felt confused and cheated by this.

The Doctor is initially captured by the martial-rule army in London for apparently looting; then questioned and detained, and finally escapes to freedom.

He simply had to mention that he was connected with U.N.I.T. and he would have been released and taken to UNIT HQ, which was WHERE HE WAS LOOKING FOR.

All this happens while Lethbridge-Stewart is looking for much-needed help, especially from his old friend and scientific advisor, the Doctor.
( Banging own head on wall now)

They stumble across our heroes because Sarah-Jane gave her name when they were being processed, after being sentenced for theft.

Unacceptably silly plot.
After this point, you don't know what to expect. Just ridiculous.

This is the only Doctor Who story I've ever read that has been so badly written as to make it feel unbelievable. And that IS saying something.

I'm a 50 year old, life long Who fan from London, and had to share this point of view.

I'm going to request a refund for this rubbish. I have almost every other Who Audiobook of my preferred Doctors.

Not the best story, but good narration

Bog-standard Doctor Who Three and Sara Jane adventure, this time with dinosaurs, being used by a bunch of crack-pots who want to take Earth back in time. Well read by Martin Jarvis.

Prehistoric monsters have started to appear to pose a new challenge to Blighty's beleaguered city folk. Not content with rudely stomping through people's living rooms and eating visiting Scotsmen, as related in the novel's prologue, they then disappear without so much as a by-your-leave. The Third Doctor and the journalist Sarah Jane Smith materialise right in the middle of this mess, as UNIT patrols the Streets enforcing an emergency curfew. Their then follows a series of captures and escapes, a pattern with which you should now be familiar if you are following this season of Who, as the Doctor and Sarah, helped by their allies from UNIT, uncover a vast conspiracy involving mad Professors, (well maybe not mad, just sociopathically single minded), shoot-em-on-sight Generals, and scheming Politicians with insincere smiles (is there any other sort?), in a demented scheme to catapult a select group of humanity back in time so it can start a new 'Golden Age.' The dinosaurs are being dragged forwards in time using a 'time scoop' (two scoops and a chocolate flake please - part of the same technology that is going to rocket this select group back in time), to create panic and empty the streets, so the baddies can get to work in an uninterrupted fashion. Now I type this I see it makes no sense whatsoever. No matter. This is vintage stuff, with Venusian Karate, some pretty high concept musings on the nature of time and the universe (what if time goes round in a circle rather than in a straight line, the Doctor tells a baffled Sarah in a baffling epilogue that also involves Chapter 1 of the Book of Ezekiel), roarsome monsters, lots of baddies and soldiers on the streets. There are some great set pieces that riveted me as a child seeing this on tv for the first time, including an imprisoned T Rex waking up in a bad mood in chains and breaking said chains, scaring the S**t out of Sarah. We also get a story arc and fascinating character development with the character of Sergeant Mike Yates, who puts the 'm' into misguided. This is a Hulke novelisation so it is top drawer quality. Hulke fills out on the backstory, does full justice to the characters, and gives us an intelligent use of linking narrative and perspective. In 'The Green Death' we had a maggot's view of the world. Here we get the dinosaur's perspective on a few occasions, including a Stegosaurus that thinks the Houses of Parliament is a monster (there's a metaphor in there somewhere). This audio book is wonderfully read by Martin Jarvis, who captures the tv personas of the characters beautifully. There is an effectively sparing use of sound effects (roaring dinosaurs and thunderous footsteps etc.) and a brief martial music motif.