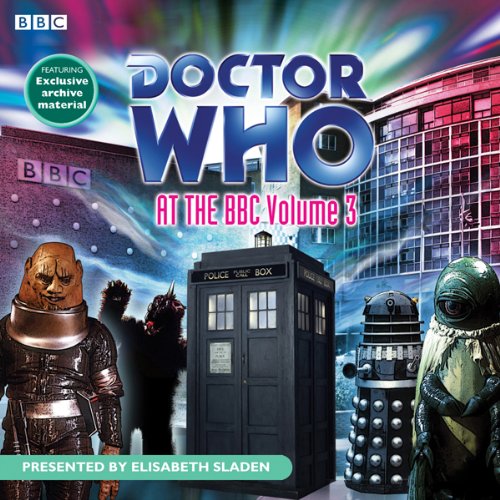 Doctor Who at the BBC, Volume 3

Presented by Elisabeth Sladen, Doctor Who at the BBC combs the avenues of Time and Space for significant spin-off moments from the much-loved TV and radio series. This third volume features a rarely heard 10-minute mini-drama starring Jon Pertwee and Elisabeth Sladen, never before broadcast. Elsewhere, the radio programme Wavelength meets the cast and crew of The Two Doctors; "Nationwide" investigates the work of the Radiophonic Workshop; and a group of schoolchildren give their views on the series in "Take Two".

The Grumbleweeds enjoy their own exciting adventure in "Dr Nobbut-Just"; "Ann Robinson" menaces the Doctor in "Dead Ringers"; and Jane Asher plays the Doctor's granddaughter in "Whatever Happened to...Susan Foreman?" Interview material includes Frank Bough's Nationwide encounter with Fourth Doctor Tom Baker and Lalla Ward's appearance on Multi-coloured Swap Shop. There are also features on the brand-new Doctor Who.

What listeners say about Doctor Who at the BBC, Volume 3

It starts with a BBC quiz, I thought I had downloaded the wrong program. There is no intro at all. I have the impression that this is the 3rd disc of a 3 CD set.

It has a longish, comedic (?) audio drama "Whatever Happened to Susan". Would be interesting to those that know the first Doctor stories, but are willing overlook the inconsistencies in the drama.

There are some TV interviews with Lalla Ward and there is a bizarre interview with Mary Tamm and Tom Baker by some English current affairs program (where the companions are referred to as 'handmaidens' by the interviewer and I don't think he was being funny).

Radio comedy sketches, that are very dated, are included. I suspect I am lacking the 80s cultural references to understand of the humour. It repeats the John Nathan Turner interview from Vol 1 (did it need repeating?)

I love Doctor Who, and delighted in Vol. 1, but found this volume intensely boring/irritating.