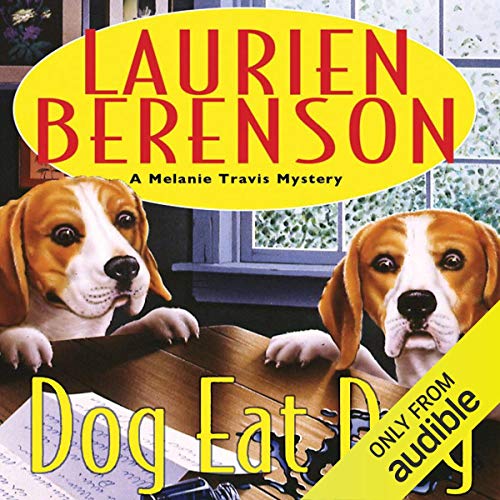 As if raising her son, training her rambunctious poodle for the show ring, and grooming fellow handler, Sam Driver, for romance aren't enough, Melanie Travis's entree into the exclusive Belle Haven Kennel Club has been met with a grisly murder. As Melanie investigates, the truth about forged pedigrees and illegal show practices come to light. And soon, Melanie finds herself moving closer to a dogged killer who's desperate enough to strike again.

The game is a paw err foot

There is mystery and murder and Poodles puppies and all kinds of mayhem. I am a cat person but I could see me with a poodle, maybe ?

This is the third book in what looks like a very good series. The lead character is Melanie Travis and she can't seem to stay out of trouble. In this book not only does she have a mystery to solve, but also an ex husband to deal with as well.

a entertaining fun book. sometimes hard to follow all of the characters but good entertainment none the less. I did enjoy this book.

I like this series but the child in this series is so annoying. Very hard to listen to any scene with the kid in it.

Melanie Travis has survived the events of the past year, and is now the owner of ten-month-old poodle puppy Faith, as well as the mother of five-year-old son Davey, and teacher in the school Davey attends.

And Aunt Peg is pulling her ever deeper into the world of dog breeding and showing. Peg's most recent maneuver is to bring Melanie to meetings of the Bell Haven Kennel Club, as her guest. It's just an unfortunate coincidence that her first meeting starts with an announcement that the previous meeting's dinner checks have gone missing, and the evening then finishes with the club's corresponding secretary being murdered right after the end of the meeting, just out of sight of other members in the dark.

Peg, of course, bullies Melanie into investigating both problems. Melanie starts asking questions, while continuing to teach, care for her child, and compete in dog shows with Faith. If that weren't keeping her busy enough, no worries; her ex-husband, Bob, has got that covered.

Because yes, Bob has suddenly reappeared, after having departed from Melanie and Davey's lives when Davey was less than a year old. It seems Bob has grown up some in the last four years, is getting married, and thinks he wants joint custody of their son. Did I mention he's moved from Connecticut to Texas?

It's all a lot to juggle. It's not made easier by the fact that asking questions about the dead corresponding secretary, Monica, is turning up lots of evidence that there are too many people with potential motives to have her killed, rather than too few. Monica was in the habit of tucking in little notes to various members with the club newsletter, letting them know she knew about the secrets they would least want revealed. She'd written to most members of the club. Which one thought their secret was worth killing for?

On top of everything else, there's the small matter of Melanie's relationship with Sam Driver. Bob isn't pleased. Sam isn't pleased. Melanie isn't pleased. Davey, though, is enjoying getting to know his father, as well as all the gifts Bob is giving him.

This is an enjoyable mystery, with characters who are interesting and decently developed. My personal complaint is that not enough time is spent on the dogs, but that's my dog-loving preference. Berenson keeps the focus on the mystery and the people who play a role in it, and handles the plot and the people well.

This is a book for dog lovers and is the first one in the series that did not have me checking the speed of the audiobook. Yes Jessica Almacy reads very (very) fast, BUT her voices are wonderful for the story. I love this series!