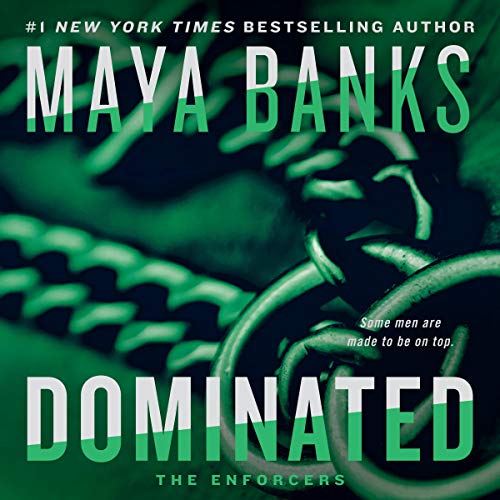 The desire that exploded in Mastered continues its conflagration in Dominated - from the New York Times bestselling author of the Surrender Trilogy.

In Drake's shadowy world, his enemies would exploit any weakness he had in order to bring him to his knees, and so he's never allowed himself to care about anyone...never exhibited any vulnerability, and it made him a force to be reckoned with. Until Evangeline - his angel. A woman who slipped past his defenses like no one had ever managed. She was his to protect and ultimately, to do that, he had to do the unthinkable and drive the only good thing in his world away.

But he will stop at nothing to get her back....

Devastated and destroyed, Evangeline doesn't know what made Drake turn on her in such a shocking manner. She only knows she'll never be the same. He once freed her from all her inhibitions, only now she is a prisoner to never-ending pain. But when Drake finds her again, she realizes there is more to his world than she ever imagined, and she must decide if she can once more trust - and submit - to the man who holds her wounded heart in his hands. And he must convince her of just how far he'll go to regain her love and forgiveness.

What listeners say about Dominated

Worst narration of female voices by a man I've ever heard. Made me cringe. And the story was so predictable, like it was written by a child. Don't waste your time on this series.

Would you try another book from Maya Banks and/or Jeremy York?

Yes, I usually like her work and his narration. the book was just not up to her usual standard

What was most disappointing about Maya Banks’s story?

The female voice wasnt his best

What character would you cut from Dominated?

Not entirely worth the wait..but I love Maya Banks

Hmm, I had no "best" that I liked in the book. What I didn't like was that Evangelene was way to forgiving of Drake. I mean, even as a submissive, she never really made him "work" for it before she plunged right back into his lifestyle, without knowing what the hell his "life" entailed.

I hated the ending. I hated that she AGAIN gave in to him so easily once he destroyed her for a 2nd time within months of getting back together after she took him back. I hated that she begged and pleaded with him for forgiveness when he showed no sign of having a rational thought process.

What aspect of Jeremy York’s performance would you have changed?

Evangelene would be submissive and still not be a door mat. If I hear her say "I'll stay as long as you want me here" one more time, I was going to scream. I have never seen a woman give over so much of herself to someone with no regards to her wants and needs.

I love Maya and will read the additional books as they come, but Evanglene was a hot mess in book 1 and 2..she has no spine, backbone or sense of self preservation. While I understand that Drake had a an awful upbringing and didn't know or understand Jack about being in relationship let alone in love, he was just plan awful to her and hateful on two occasions. He never, not once, gave an ounce of blood, so to speak, for her. Why they had the connection they had I will never know. The only saving grace was Silas, Maddox, and Justice. If not for them, that poor girl wouldn't have had any self respect.

Cheesy and phony to the max

Too phony and cheesy for my taste... I've to give up without finishing the book

I typically like Maya banks books but this felt like it was written by a total amateur. The verbiage was so redundant it felt like the author was being paid by the word. I found myself rolling my eyes every two minutes. Furthermore, I really wasn't a fan of the narrator either. I almost quit listening on multiple occasions but I can never personally leave a story unfinished

Jeremy is great at the male voice, but the female voice ruined it for me. Evangeline was pathetically weak.

This book drags on and on and on about nothing. I want to reach into my ear buds and choke both the girl and the guy. I read through half and I just couldn't take it anymore. I'm not even going to request a return as I'm ashamed at myself for not heeding the reviews. Don't get me wrong I love MB but this book should never have been written. Read the first but don't bother purchasing the the 2nd.

Title should have been "The Never Ending Story"

This book was part 2 of Drake and Evangeline's story. It really should have been finished in 1 part because part 2 just went on...and on...and on and repeated and repeated. As much as it went on it did not wrap up some of the more interesting parts such as the police investigation and whether or not Evangeline's "ex roommates/friends" were up to no good. All this book did was have Drake mess up twice and have to do some major damage control with Evangeline before the got their HEA. Jeremy York is a great narrator but even he sounded bored in some areas.

This story Dominated in never ending; overall I give it 2 stars

such a whinny gangster!

I have never read a book where the head gangster was so weak and whinny.

Maybe it's the narrator, or maybe the material he had to work with, but this is not the usual Mr. Jeremy York style of reading.

Not a fan of the performance

The story was slow. the performance was not good. overall? not a big fan bummer

I’ve fallen in love with these characters so much. I wanted to slap Angel for forgiving so quickly however I think I would feel the same. I’m really looking forward to the next book to see what happens with this couple.

absolutely loved listening to this. i really couldnt get enough of listening to it. i loved lisrening to the narrator he did a great job. will definately be getting more of these