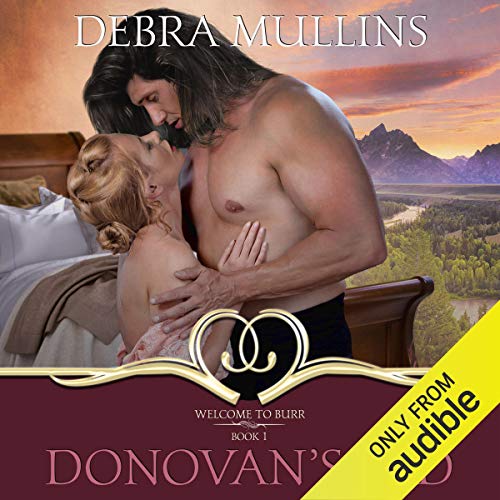 In this battle of the sexes, the ultimate prize is love.

Sarah Calhoun is bound and determined to restore honor to the family name the only way she knows how - make her late father's newspaper, the Burr Chronicle, the most successful in the Wyoming Territory.

Haunted by past scandal, she knows one misstep, one misunderstanding, could bring disgrace back down on her head. Yet that doesn't stop her from running an article about the insulting Jack Donovan. The blasted man is shopping for a wife as he would a horse!

Jack finally has the house in the kind of town he's always dreamed about. Now all that's missing is a wife. At first, he thinks Sarah's scathing article about his quest is a good thing - until he finds himself hounded by hordes of young girls, spinsters, and widows. Still, he can't stop thinking about the sassy newspaper editor who started it all.

Sarah is as determined to ignore her impossible attraction to Donovan as she is to uncover his mysterious past. But the harder she digs for his secrets, the deeper he hides them. Until there's only one rock left unturned. His heart.

"Narrator Joe Arden portrays a myriad of characters who live in a small town in Wyoming. Rumors and stories circulate among the townsfolk when an elaborately decorated bed is carted down their main street. Local newspaper owner Sarah Calhoun is determined to discover the story behind the bed AND its owner - Jack Donovan, eligible bachelor. Arden ably captures Sarah's strong personality and Jack's debonair ruggedness. Arden's falsetto conveys the snarky attitude of the women who judge Sarah for her scandalous past, including those jockeying for a chance to become Jack's wife. Arden's Southern drawl and well-timed delivery bring out the male characters' jocular humor and exaggerate their buffoonish traits. As the heartfelt attraction that develops between Jack and Sarah is made palpable, Arden's deep tones and dramatic pacing sizzle with temptation and sensuality." (AudioFile Magazine)

What listeners say about Donovan's Bed

At the time I bought this book audible had no reviews for it.
I thought... I love 90% of Joe Arden's books so I'll take a chance.
Joe did give a stellar performance as usual but, for me this book just didn't have that spark.
I still think it's a well written book with a decent plot.
I just wish it would have gave me the feelings and tingles needed to make it a 5 star romance that I can get into.
Maybe it's because I like my romance with a bit more steam.. IDK?
whatever it was? it didn't work for me.
So I say, for some of you this book is definitely credit worthy.
For others (like me).. catch it on sale and save the credit.

I loved the story line was thrown at first with the Bible reading and faith talk but then just took it in as part of the people.
This book is for those who think love always wins. Dont recommend if your looking for hot love scene their are none. Just a lovely post civil war love tale of inspiratio

Joe Arden at his best as an entire town!!!

No one does it better than Arden. Western that flows smoothly with great side kicks

Joe Arden should do more westerns.

The story was good. Joe Arden made it great with his character voices and western twang.

I really like the story, but I think it dragged out too long in places. Of course Joe Arden brings the story to life. Book is definitely entertaining.

this is my first audio from this author and I got it cause Joe Arden was narrating. It was a sweet suprise the story was was sweet and different that what usually read and hear. defenitely going to read more this author.

Enjoyed it a lot!

This was a good story with a good plot and interesting, well rounded characters. I must say I'm coming to love Debra Mullens' writing very much. The narration by Joe Arden was brilliant. All the different voices he conjures up is amazing. Well done to all.

I enjoyed this series (3) it was an easy listen and I love Joe Ardens voice!!!

What happens to you as s child, form who you are as an adult.

I enjoyed this western historical romance story. I listened to it from audio. The narrator did a great job with reading the story. The main two characters were Sarah Calhoun and Jack Donovan.

Sarah Calhoun is  determined to restore honor to her family name. She want to be the most successful with her father newspaper print press.  But she having a hard time doing this because of the scandal that was in the her past.

Jack Donovan has finally decided to put the past behind him and make a new life.  He wants to have a wife and kids in the future. So when a sassy newspaper editor start to hound him about his past and what he doing.

This was a fun enjoyable story with a lot of laughter and adventure. And also some mystery to it.

I saw this on Audible and decided to give it a try. This is my honest unbiased opinion.