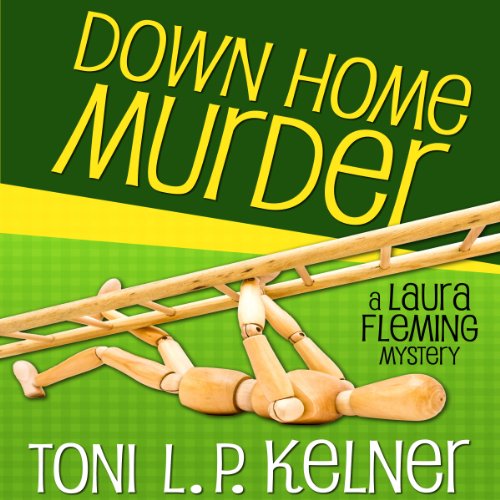 When a tragic family accident brings Laura Fleming back home to Byerly, North Carolina, the sleuth discovers that her beloved grampaw's fatal fall from a ladder in the old mill was not an accident.

My favorite cousin is a nice young boy in the KKK!

What disappointed you about Down Home Murder?

It was a listing of terribly unhealthy fast food consumed by a very large family. The narrator felt so very sympathetic towards her cousin, a new member of the KKK.

What was most disappointing about Toni L. P. Kelner’s story?

Too much Southern, too much lightness--I really did not like her drawls and wondered seriously if the speed on my iPod was off. It was not.

I won't be fooled again. This is most certainly the worst "read" I have had on audible.com.

I suffered through three chapters of this story before I decided I could not take it anymore. At first, I thought it was the narrator who had the worst accent ever. Clearly, she had never been to NC. I am from NC and have never heard an accent like hers (not even sure where I would hear one like hers). But after suffering through another couple of chapters, I realized that I hated the story as well. It was far too negative and offensive for me. Never seen people so very back woods!!! Atrocious!

White authors writing about race in southern America often makes me uncomfortable, but I haven't been as uncomfortable as I was while listening to this book in a long time. The main character is, of course, a liberal ex-native of the Southern locality in question, and comments on her family's inappropriate generalizations frequently.

However, there is a certain sense that "this is just the way people talk" that leaves me cold. Coming to this book from Laura Lipman's Baltimore mysteries only made this distinction more clear. Lippman always manages to tread that line without verging into offensive territory. Kelner is either not as fine an author or not as cognizant of the issues with her topic matter. I couldn't get past the first few chapters.

My fault. Consider the title. If I weren't ready for home-fried folk cliches, I shouldn't have clicked on purchase. On the other hand, this would have been a much better book had an editor (remember editors, a nearly extinct species?) red-penciled through the worst cliches. Rode hard and put up wet. Dry as a bone. Sweet as honey.

There's a core of a pretty good mystery here, which is why I gave it a 3. Pretty good.

One more thing, as long as I'm complaining: The narrator's voice is too old for the character's. The latter is somewhere in her early 20s. The former might have daughters that age. The middle-aged young person was a distraction.

I like a cozy mystery as much as the next one, but this one wasn't worth the reduced price nor the time it took to listen. The main character is a 20 something computer programmer who returns to NC when the grandfather who raised her is critically injured in a mill. Her husband is a professor of literature who is constantly quoting The Bard. They do not make for exciting listening, especially since the narrator sounds like she's in her 50s and doesn't do the South or young voices justice.

The book was written 20 years ago, which is perhaps why the characters come off as such racists, but to me it was very disconcerting. I mean it was 1993, not 1953.

The only positive is that I didn't know who the murderer was until the last chapter.

What disappointed you about Down Home Murder?

Would you ever listen to anything by Toni L. P. Kelner again?

Seriously?? People actually LIKED this book? I can't even make it halfway through. I know...let's take every stereotype there ever was regarding small town southern culture, and write them into a story that reads more like a soap opera, with poorly developed, overly-stereotypical redneck characters! The whole storyline reads like something done for a high school English project back in the 1970's...not the 1990's. My husband is from a very small town in North Carolina and while his family definitely has a different culture than those from (eh-hem) The Big City, I found this book extraordinarily offensive and simple. Has Toni Kelner ever *been* to a small town in North Carolina? I see from her website she lives in Charlotte...CHARLOTTE! You know...a big city. Like I said, there's no way I can ever make it through the rest of this book. Glad I bought this on sale and didn't waste a whole credit on it.

There were several problems with this book, beginning with the production. About 10 times poor editing made its jarring presence known as the words jumped, skipped and settled back into the rhythm of the story. Ouch.

The reader, well, let's just say that she couldn't keep a-hold of her Southern. The protagonist kept losing her Southern accent. Not good. And for the love all that's foothills, it's Hick-ry, not Hick-o-ry. That took me out of the story several times.

As for the author, I appreciate -- maybe -- what she is trying to do, but the southern stereotypes. Help me. I'm from North Carolina (not that far from Hickory, actually) and she just slams them all full force. I know that in the end we are supposed to appreciate community, family, etc. But she sure has to drag us through the racism/sexism/small town/small mind thing, doesn't she? I fail to see why that was necessary.

All that said, the mystery itself was interesting and held my interest the entire time. I'm mildly curious as to whether the author matures over the rest of the series; but not really interested enough to listen again. Especially if the reader isn't going to pronounce Hickory right.

Believe the negative reviews. Interesting that the Amazon reviewers and Audible reviewers are so different.

Don't waste a minute of your life

Awful story. I tried to listen to this story twice within the year and could not finish. The narrator was too loud and too "country sounding" and not southern. Nothing to grasp my interest at the beginning of the story. It was difficult to distinguish the differences among the characters. I could not find a reason to care about any of the characters so I did not finish the story, again. This is very amateurish...like the Difference Between Home Videos and a Studio Produced movie.

Just About Every Southern Stereotype

Would you try another book from Toni L. P. Kelner and/or Gayle Hendrix?

Would you ever listen to anything by Toni L. P. Kelner again?

The accent was awful.

Disappointment. The book was light on story and heavy on stereotype.