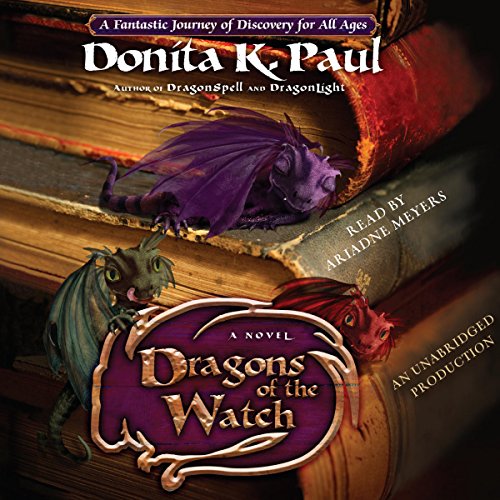 Trapped in a forgotten city, bound by secrets, Ellie and Bealomondore must enlist the dragons of the watch to find freedom.

Ellie knows exactly where she is going. She just wants to experience the pomp and circumstance of a royal wedding, then settle into a simple life with a country husband.

With too many choices, Bealomondore’s future is a tangle of possibilities. He is respected, well-known, and admired among the elite of Chiril, but Wulder demands he narrow his focus and follow his Creator, one step at a time.

Both Ellie and Bealomondore’s plans are thwarted when they find themselves lost in an isolated city. As they discern the needs of a group of wild children and a very old man, clues began to surface and a bigger picture is revealed. With the help of the dragons of the watch, can the two tumanhofers find the way out - and perhaps discover their connection to something greater than themselves?

What listeners say about Dragons of the Watch

Moving story that blew the ending

What disappointed you about Dragons of the Watch?

So many questions were asked, almost none were answered. The writer just gave up and ended the book at the start of the third act. It needed at least 2, maybe 3 more chapters to tie up the most important loose ends that were presented.

Would you ever listen to anything by Donita K. Paul again?

I would think twice about it before trying another.

What does Ariadne Meyers bring to the story that you wouldn’t experience if you just read the book?

If you could play editor, what scene or scenes would you have cut from Dragons of the Watch?

None that I would cut. I would demand the extra chapters to fill out the story.

storyline was good. But not as good as the previous books. the narrator is great

Primary characters were missing until the end. It took a long time to get into the story. Then it ended.

What it's over now? Huh?

Could you see Dragons of the Watch being made into a movie or a TV series? Who should the stars be?