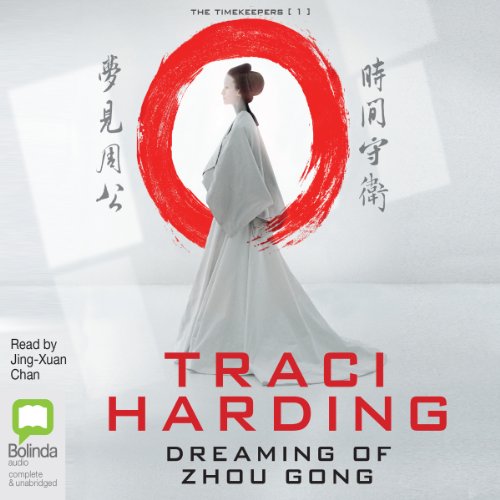 Steam clouds rise off the water as a ferry approaches a jetty in ancient China. Onboard is Hudan, one of the mysterious Wu who reside on the sacred mountain of Li Shan.

The Wu have been living in isolation for decades, while the arrogant Shang emperor and his enchantress have ruled the land. It has been a terrible time for the common people and the noble Ji brothers - Dan and Fa - are keen to bring the emperor's reign of terror to an end. They are told a Wu prophecy has predicted the fall of the emperor, but first they must journey to Li Shan to learn the truth. When the Ji brothers join forces with the enigmatic Hudan and her equally mysterious tiger sister, Huxin, they begin a powerful journey of love and adventure. But the Shang emperor is not their greatest threat. There is a dark curse that has plagued the rulers of the land for generations. The mysterious Sons of the Sky who visit Hudan in her dreams have a plan to destroy it. Can they be trusted? Dreaming of Zhou Gong is a beautiful, evocative journey through ancient China from best-selling author Traci Harding.

This wonderful story is perfectly bought to the level of an authentic historical narative by Jing Xuan Chan's presentation.

What was most disappointing about Traci Harding’s story?

It's the same story rehashed and set in another time line, it ended up just being noise in my ears.

Would you listen to another book narrated by Jing Xuan Chan?

Jing is a good reader but does not have much of a range when it comes to characters voices.

I'm afraid I didn't enjoy this book, which is a shame as I enjoyed "Masters of Reality" and "An Echo in Time" and was looking forward to this book. I don't think I'd bother with the rest of this series if there is more to come.

Having this book read out loud by someone who understands the language made it much easier to follow.

This 1st book of the timekeepers Trillogy is, in my mind, a tale that truly shows the depths of Traci Harding as a writer. Either she was drawing on a past life connection or her muse was a soul with Chinese experience ( or both). Her research must have been a fascinating history lesson also, as bringing this tale to light has made it appear as if written from a truly Chinese perspective, if with an Australian flare.
Having Jing Xuan Chan do the reading was a masterstroke. Her heritage, pronunciation and cultural understanding have added greater authenticity to the story, often helping it appear more of a historic tail, than a time hopping, psychic fantasy.
I highly recommend this audiobook to all.