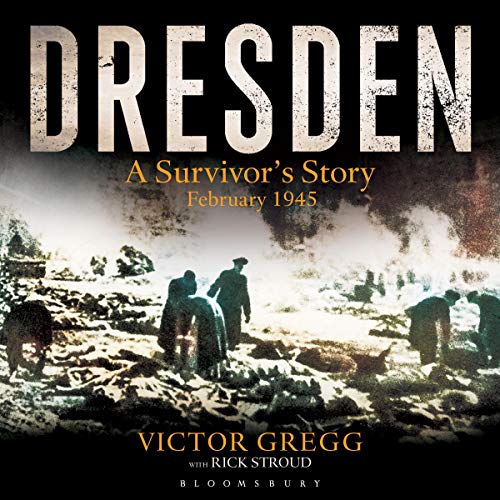 In Slaughterhouse-Five, Kurt Vonnegut fictionalised his time as a prisoner of war in Dresden in 1945. Vonnegut was imprisoned in a cellar while the firestorm raged through the city, wiping out generations of innocent lives. Victor Gregg remained aboveground throughout the firebombing. This is his true eyewitness account of that week in February 1945.

Already a seasoned soldier with the Rifle Brigade, Gregg joined the 10th Parachute Regiment in 1944. He was captured at Arnhem, where he volunteered to be sent to a work camp rather than become another faceless number in the huge POW camps. With two failed escape attempts under his belt, Gregg was eventually caught sabotaging a factory and sent to Dresden for execution.

Before Gregg could be executed, the British Royal Air Force and the United States Army Air Forces dropped more than 3,900 tons of high-explosive bombs and incendiary devices on Dresden in four air raids over two days in February 1945. The resulting firestorm destroyed six square miles of the city centre. 25,000 people, mostly civilians, were estimated to have been killed. Postwar discussion of whether or not the attacks were justified has led to the bombing becoming one of the moral questions of the Second World War.

In Gregg's firsthand narrative, personal and punchy, he describes the trauma and carnage of the Dresden bombing. After the raid, he spent five days helping to recover a city of innocent civilians, thousands of whom had died in the firestorm, trapped underground in human ovens. As order was restored, his life was once more in danger, and he escaped to the east, spending the last weeks of the war with the Russians.

What listeners say about Dresden

Terrible event that can not be forgotten

We need to remember what happened to Dresden and not continue to memory hole this horrific war crime. Thank you for this first hand and brave recollection of these dreadful events.