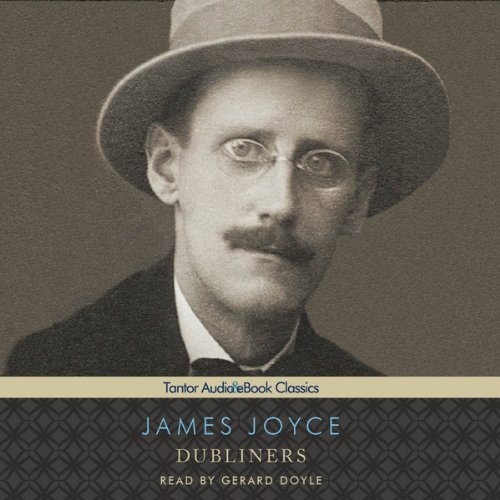 Dubliners is a collection of short stories by James Joyce that was first published in 1914. The 15 stories were meant to be a naturalistic depiction of the Irish middle-class life in and around Dublin in the early years of the 20th century. The stories were written at a time when Irish nationalism was at its peak and a search for a national identity and purpose was raging; at a crossroads of history and culture, Ireland was jolted by various converging ideas and influences. They center on Joyce's idea of an epiphany: a moment where a character has a special moment of self-understanding or illumination. The initial stories in the collection are narrated by children as protagonists, and as the stories continue, they deal with the lives and concerns of progressively older people. This is in line with Joyce's tripartite division of the collection into childhood, adolescence, and maturity. <'p>

This narrator fits Joyce's writing like a glove - really wonderful audiobook rendition. He reads with great connection and love for the material, and it comes across in the hypnotizing storytelling.

What did you love best about Dubliners?

I loved the characters and how they are so faithful to the real thing.

I love the way Gerard Doyle speaks in the typical Dublin accent;

The narrator was able to transport me directly to Dublin all though these stories told in a Dublin accent.

I'm so happy i bought the edition read by Gerard Doyle. I'd love to hear him reading Ulysses.

Timeless classic, and a delightfully enthusiastic performance. Even his singing voice was great! The reading accents the text throughout.

Where does Dubliners rank among all the audiobooks you’ve listened to so far?

The different short stories and content of the stories

His imitation of women

If you could take any character from Dubliners out to dinner, who would it be and why?

The priest in the first story. Ask him, what drove him crazy ?

This book wasn???t for you, but who do you think might enjoy it more?

This is a pretty depressing read- which I guess is the point. It is early work that Joyce was unable to get published until later in his career. He could have used an editor on this one.