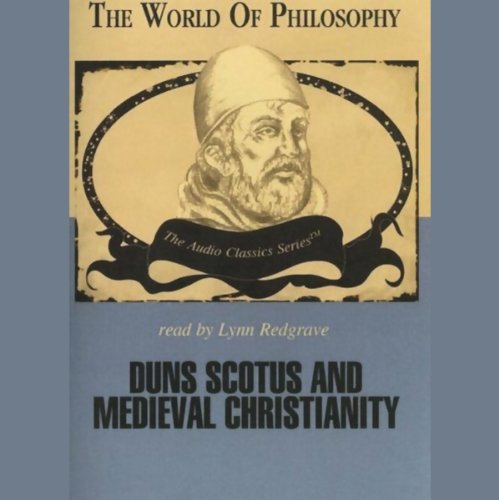 The Roman Empire became Christian in 323 AD; about two centuries later, the rest of Europe began to convert. Medieval culture blurred the line between the sacred and the secular. While political and religious hierarchies vied for influence, liberal arts education claimed to seek sacred truths through secular means. But when Aristotle's works were first translated from Arabic, there began a conflict between reason and faith. Franciscan John Duns Scotus was one philosopher who tried to bridge this gap.

The World of Philosophy series presents the questions, interests, and worldviews of the world's great philosophers and philosophical traditions. Special emphasis on clear and relevant explanations, in understandable language, give you a new arsenal of insights toward living a better life.

What listeners say about Duns Scotus and Medieval Christianity

In depth probe of pertinent topic

Reason and faith talk past each other. During the middle ages humanist, those who believe 'man is the measurer of all things' and in the progress of human nature, mocked Duns Scotus so much that today 'dunce' derived from Scotus' first name means slow witted, and this book will show you that Duns Scotus is definitely not slow witted.

Good books on scholasticism and Duns Scotus are incredibly hard to find. 'Thisness' and 'whatness' (i.e. form and matter, accident and essence) is still as meaningful today even if people find the references obscure. Being and the 'being of beings' is just as meaningful. Aquinas will say being is at most analogical to a Supreme Being. Scotus disagrees. Aquinas reworks Aristotle and makes reason and rational thought leading to studying nature as not only the language of God but in addition as an end in itself while opening up a crack giving science a chance to flourish beyond dogmatic certainty.

Our political beliefs of today ultimately appeal to scholastic foundations from the middle ages but we let our feeling get in the way of our understanding, and we ignore our own first principles and fall into the trap of clever word games while forgetting what we are really debating. The scholastics knew how the 'a priori' (latin: from first principles) tainted their own understanding, and they were wise to try to understand why they understood what they thought they knew. Do we just name things or is there an abstract truth behind the name (nominalism verse platonic realism)? Rod Dreher, a political commentator, in his book 'The Benedict Option' gets the relevance to today, and thinks that William of Occam's nominalism has led to crisis in the West and he definitely prefers Scotus' 'truth is out there' approach (Dreher wants to end most associations with others who don't think exactly as he does against marriage equality, for example, and prefers to invoke a 'Benedict Option', a separation from others, because his absolutism requires that and nominalism opens the door to a relativism which Dreher finds reprehensible. Weirdly, the Washington Post had a story on how Dreher is a serious deep intellectual, but I think one should just read his books and decide for themselves).

There's a question of Being since at least the time of Parmenides ('nothing is not possible', 'why is there something instead of nothing', 'there is only the one'). Is the being of all beings, a Supreme Being immanently knowable? Aquinas thinks not and he thinks by analogy is the closest we can get at the nature of a Supreme Being, the ultimate Good, while Scotus will think differently. An all powerful God is never limited according to Scotus and the laws of nature are His laws and don't bind Him (except in matters of logical contradiction such as a 'square circle') and the Euthyphro dilemma is not a dilemma because God determines what is pious by fiat, free will is more than just grace and Pelagius doesn't know what he is talking about. All of this is in this book and are defended by Scotus, and each of these items still divide us politically today but are hidden within our clever language games so we end up arguing about something else, but all the while it is these kind of first premises that we can't get past.

The scholastics are never boring when they are explained as well as this book puts them into perspective. Hannah Arendt in 'Life of the Mind' mentioned how important Duns Scotus was to Heidegger and she too seemed to hold Scotus in equally high esteem, and I wanted to understand Scotus as well. Dante, a humanist and marks the end period of the scholastics, will put Aquinas in Paradise and believes that hope is the space between science (reason) and revelation (faith). Aquinas will say reason can only take us so far, but he'll say that reason should be used to support faith, while Scotus will say faith comes before reason.

As this book says, the scholastics never argued about 'the number of angels on the head of pin', their questions are still just as relevant today and are at the heart of what we believe today.

Just one warning regarding this book: don't expect an easy read. The author wrote clearly, but really assumed his reader wanted to learn and didn't hold back when he was explaining what the scholastics meant.

it's in a somewhat similar vein to the '90 Minutes' books, but for only twice as long you get about a hundreth of the author's witt, snark, sneering and hot takes (i'm looking at YOU, "paul strathern" ... if that *is* your real name......) i actually VERY much enjoyed this book, and will be reading the rest of the series now,... with my ears or course.

Good and even handed overview

Lynn Redgrave read the script of this overview well and the overview itself was thorough and deep without being inscrutable. Ralph McInerny is truly an expert on this topic and does a good job of leading the reader through the medieval period. Worth it if you want a clearer idea of medieval philosophy and it’s eventual and regrettable demise for the ordinary person at least .

Confused Thomas More and Thomas Becket. Got the dates for St Bonaventure off by several hundred years. Then I stopped.

restores the reason of faith.

Establishes an understanding of reason without dumbing down faith. Thoroughly enjoyed this presentation. Tank you

Whenever they read a quote they use an accent for the author of the quote. A French author gets a French accent and an Arabic writer gets a middle eastern accent. People who want to learn about theology and philosophy are not looking for this kind of dramatization. This is acceptable for an adaptation of a novel but distracting in a work of nonfiction.

I enjoyed learning this information. Quite well presented information. But the recording includes too many different voices. It’s irrelevant and distracting