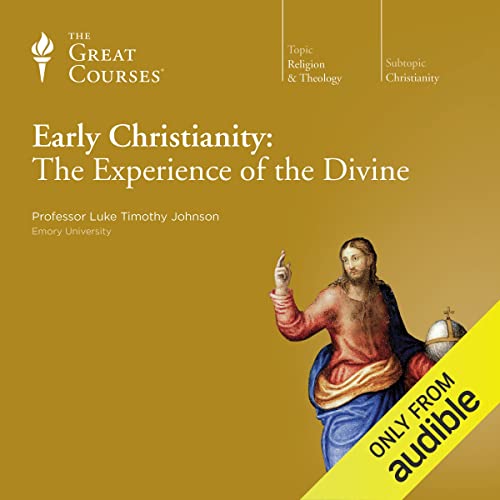 Early Christianity: The Experience of the Divine

After 2,000 years, Christianity is the world's largest religion and continues to prosper and grow. What accounts for its continued popularity?

In these twenty-four lectures, Professor Johnson maintains that the most familiar aspects of Christianity-its myths, institutions, ideas and morality-are only its outer "husk." He takes you on a journey to find the "kernel" of Christianity's appeal: religious experience. You'll travel back to Christianity's origins during its first 300 years to identify the elements that first made it appealing and which still hold the secret to its ability to attract new followers.

Professor Johnson employs scholarly techniques that have only recently been applied to religion. In introducing early Christian religious experience, Professor Johnson looks at questions that are new and intellectually exciting in the study of religion. Was Christ the founder of Christianity? Was Christianity's early growth due to his life and works or to his followers' powerful experience of his death and resurrection, their sense of having been transformed by the Holy Spirit?

By combining such disciplines as history, the social sciences, and comparative literary analysis, you'll look at religious experience and behavior from a fresh perspective. You'll consider a variety of theories developed by the philosophers Alfred North Whitehead and Immanuel Kant, Emil Durkheim, the founder of sociology, and Sigmund Freud. And to better understand religious experience in Christianity, you'll also study it in the two religions with which early Christianity co-existed: Greco-Roman paganism and Judaism.

What listeners say about Early Christianity: The Experience of the Divine

Fantastic although it made me Agnostic

I've been struggling with faith for some time and can finally but the matter of Christianity to bed. You can go to any Church and listen to people ranting about God, but ask them anything about what else was going on around 1 AD and you'd think the world was blank. This course cut though so much BS and presented a very neutral view of the growth of the worlds largest religion. Highly recommended for anyone seeking answers.

Where does Early Christianity: The Experience of the Divine rank among all the audiobooks you’ve listened to so far?

What was one of the most memorable moments of Early Christianity: The Experience of the Divine?

Have you listened to any of Professor Luke Timothy Johnson’s other performances before? How does this one compare?

Tension Between The Institutional And The Charismatic

easy to follow, lecturer is a benedictine so has inside perspective yet purely objective viewpoint. for those interested in sociology of religious experience.

What was most disappointing about The Great Courses and Luke Timothy Johnson ’s story?

Who would you have cast as narrator instead of Professor Luke Timothy Johnson?

A bit more clarity in the title would benefit those interested in paganism.

Would you be willing to try another book from The Great Courses and Luke Timothy Johnson ? Why or why not?

If free or heavily discounted. Luke Timothy Johnson comes across as a self-absorbed, pompous ass. He may know a lot about the subject, but often I can only hear "blah, blah, blah..."

Would you listen to another book narrated by Professor Luke Timothy Johnson?

Maybe, if LT Johnson did not narrate.

Johnson poisons his own course with poor narration.

Provides insight into the Early Church

I feel that I have a better understanding of the Bible and Christian Churches after I listen to Dr. Johnson’s courses on Christianity. Christian churches teach very little about the environment in which the Early Church developed. Christianity grew at a greater rate than any other religion without employing force. Other than the Gospels and Paul’s letters, historians have little information about activities of most disciples. The story of Jesus spread aurally. Despite rapid growth, the Early Church struggled to define itself, and developed structure only as the original generation began dying off,

Dr. Johnson describes some important apocryphal gospels and why they are not accepted by mainstream churches.

Takes him a long time to get rolling in the reading. It is super clear but he’s a really endearing teacher and I enjoyed the time you spent learning together.

The series of lectures is well organized. I enjoyed the recording quality and the speaker delivery

I enjoyed looking at Early Christianity and it's influences from a sociological stand point rather than purely historical.

Now I'm finished, I want to listen to this all over again to glean more from it, There's so much here, and it has helped me with my own cognitive dissonance about the Christian church. Thank you very much to Luke Timothy Johnson

Too androcentric a take for a xxi century historian

Just one example: Mr Johnson repeats this statement several times: ‘ ALL jews were circumcised’
This begs the question : were all Jews male?!
For Mr Johnson Jewish women are so not part of the story that he doesn’t even notice The outrageousness of his claim.
And this mentality percolates all the rest of his telling.

I did not think that I would live to the day when a Benedictine monk will passionately invite his listeners to close ranks with polytheists. The text is almost unbearable for Christian listeners, the arguments are primitive, in particular those related to archeology, history, and religion. His treatment of religion is a compilation of secular and shallow natural religion dogmas. A very disappointing and dubious example of contemporary theology, notwithstanding the author's high posts in academia. All in all, avoid this book, if you seek genuine interpretation of Christian faith and its history and if you are here to draw an inspiration from the word of Christ.

These lectures are not to be missed, but too be undertaken on the basis that much of it is uncomfortable and perhaps doesn’t fit well with us. The lecturer is highly accomplished and informed and makes for a truly worthwhile listing experience.