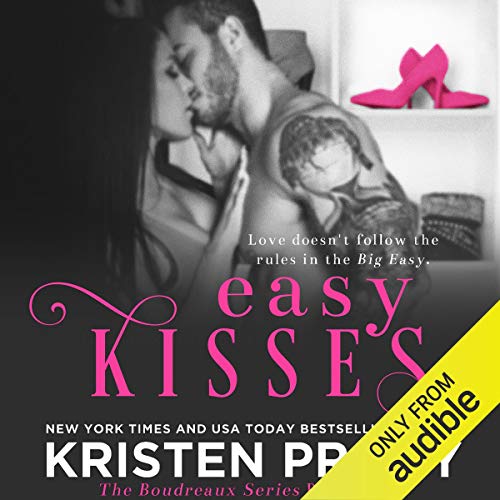 Simon Danbury, an internationally sought-after motivational speaker, helps women from all walks of life with love, self-esteem, dating, and career building skills. Handsome, witty, and wealthy, Simon seemingly has everything a man could want. But appearances can be deceiving. While Simon may have the answers for millions of women all over the world, when it comes to his own love life, he's a giant, sexy mess. Divorced, and convinced that he'll never love again, the very last thing he expects is one Charly Boudreaux.

Charly doesn't want to be at this seminar in the middle of nowhere, but her sister made her go. She's the one who has her life together. Great career, amazing family, nice home, and loyal friends. So what if she doesn't have a man? She doesn't need one. If she's learned anything in her almost 30 years, it's that men are more trouble than they're worth. And they have a nasty habit of breaking your heart into a million tiny pieces. So she'll sit through all of Simon's touchy feely crap and go home and get on with her life. Except Simon isn't really spouting crap, and when he smiles at her, the butterflies are ridiculous.

Never mixing business with pleasure, Simon finds Charly, a bright spot in a universe that's been dark for too long. But will he be able to resist her? And why would he want to?

British character without the accent?

Would you try another book from Kristen Proby and/or Sebastian York and Rachel Fulginiti ?

The story was interesting enough but was not my favorite of The Boudreaux series. However, the narration fell flat. The British dialect was present, but neither narrator adopted the English accent. I was frustrating since the Louisiana drawl is heard throughout.

11 of 13 people found this review helpful

It makes me a little crazy when one of the main descriptions of a character is their accent and the reader lacks the ability to pull off that accent.

The British accents were awful! The story was entertaining but a little weak and predictable. Charlie deserved a stronger storyline.

This was a decent story. I think I liked it better that the first couple of books in the Boudreaux series. There was more story and less sex in this book. Always a plus when there a story to read\listen too.

I really liked Charly, she was a great strong female character and I loved her shoe store! LOL I liked Simon too, he was handsome, and of course rich. The chemistry between these two was good. It wasn't an insta lust sex fest at first sight. They actually got to know each other so the relationship felt more genuine and not forced. There was plenty of sex, it just didn't take over the story.

The story line and plot was pretty typical for this genre, no mystery or anything like that. Just boy meets girl get to know each other and have a HEA with of course at least one misunderstanding.

There was lots of dialogue throughout the entire book which was good.

As for the narration. Well, as much as I love Sebastian York, Simon was from England. There was no accent for him from SY. And Rachel Fulginiti tried to give him the accent at times but it was a fail on the accent. Otherwise the narration was very good.

Not my favorite narration

I loved the book, however if there's going to be a character speaking British dialect, the accent should be on point. It was not. And it almost ruined the book for me. I love these narrators in other books, but not with a half assed British accent.

Readers made it hard to listen

These books are cute even if the author using the same sex scenes and jesters often. The issue with this book is if you have someone from England then use an English reader. Both readers are not good with the accent and should have just read in their original voices, which still would have distracted but you might not laugh.
Best book in this series so far is Melody!

Would you consider the audio edition of Easy Kisses to be better than the print version?

Yes, I would!! I like listening to a great book an able to do other things.

I love Charlie in the book but Simon always had my attention!

Have you listened to any of Sebastian York and Rachel Fulginiti ’s other performances before? How does this one compare?

This book was heart felt and the writer did a great job. The people who read the book made it worth listening too!

If you are a stickler for accents, read this; don't listen.

I once wrote in a review that Sebastian York could read the phone book and I would love it. I was wrong. He can't do a British accent, and he shouldn't be cast to read one. The female narrator is great for Charley but isn't great at the British accent either. Better than York, but not great. Seriously...I love him, but if you only pronounce one of every 1000 words with an accent, why bother?

The story was good, but just read this installment and listen to the rest.

No surprise, I absolutely loved Easy Kisses! I love going to New Orleans by way of Kristen Proby. I love the Boudreaux family and everything that comes along with it. Simon and Charlotte were sizzling in this story.

Another winning book in this great series

Charlie & Simon's story read by my most favourite narrators! Great to catch up on all the siblings too.

A great book good story line, shame about the English accent or lack of it the male reader was so American trying to portrait an English accent but failed! Being British myself it stood out, however, I still enjoyed the book.