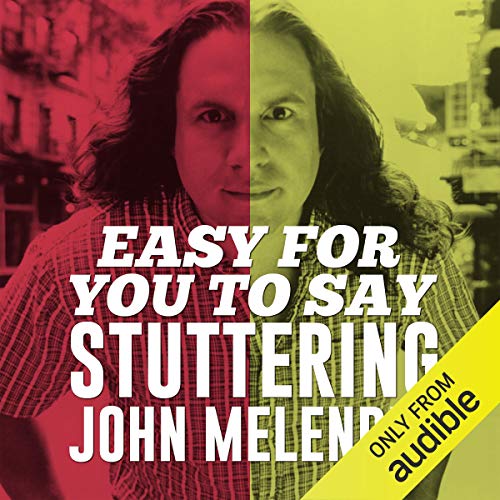 Easy for You to Say

Easy For You To Say is "Stuttering" John Melendez's memoir of his childhood being bullied in school for his stutter; his years as an on-air personality with The Howard Stern Show; and his subsequent 10-year career as a writer and on-air announcer for Jay Leno's Tonight Show. It details his famously acerbic relationships with celebrities he interviewed/insulted (Raquel Welch once punched him in the face). In the audiobook, Howard Stern emerges as a surprisingly mean, stingy, and megalomaniacal boss - and Jay Leno as a seeming sufferer from OCD.

Hmmmm... I was expecting more never before heard stories. A lot of the stories we're talked about on the Stern show. John is obviously holding back. You teased on your podcast and Twitter that this would be a more juicy, revealing, tell all book. It's obvious you're still scared of Stern. Too bad.

John Melendez is a ego maniac. I find the majority of this book hard to belive.

Whining all about Howard

If he didn’t have Howard it would be about 10 pages long. You should be thanking Howard for giving you a chance , then stabbing him in the back

Listen to podcast for most of these stories.

Being a fan since the 80’s there were no stern surprises. Pair that with the podcast and the book is nothing really new. No timeline, it jumps all over the place with a lot of no ending stories. Lots of filler.

This is no where close to the juicy tell all promised it’s mostly boring personal stories and the few stern stories are ones already told ...it’s one of those books that after half a chapter you realize you weren’t paying attention and don’t remember any of it just to reread it and realize it wasn’t worth the extra time to be just as dissatisfied

I despise John, but good book. However...

...I cannot bring myself to recommend this book, nor rate it highly.

John is a horrible speaker and a worst reader. This is book poorly edited, poorly researched.

In between two chapters, John can be heard speaking to whoever is engineering. John mangles the language and mispronounces word after word.

Then, there’s the part where he references the movie “The King’s Speech” where explains the movie as being about ‘King Edward’ when the movie is about George VI.

very good behind the scene of the stern show

More or less what you'd expect, in a great way.

Want to hear a bunch of Stern related stuff through the lens of a common man who got to lead an extraordinary life? Craving a little dirt on Stern fan favorites like Artie Lange, Robin Quivers, and Howard himself (as well as a few TMI moments from our resident OCD st-st-stuttering wise ass?) This is the book for you.

It's read by the guy who wrote it, and he did an amazing job! I don't mean that because he didn't stutter during it, either. I just mean overall, I've listened to a lot of audio books and while the subject matter may have been good, sometimes you just don't have an impactful narrator and you lose interest. Not with John. He made this one a real easy and enjoyable listen.

Interesting behind the scenes explanation of a number of Howard Stern and Tonight Show stories.
Very funny at times. Well worth the listen.

This was the worst purchase I’ve ever made. Don’t waste your time, money or audible credits.

I was worried about this book being British and only experiencing John through YouTube videos as only heard stern in his Sirius days but it is a great insight into the Howard stern show. Top job John, you have a new fan
Marc