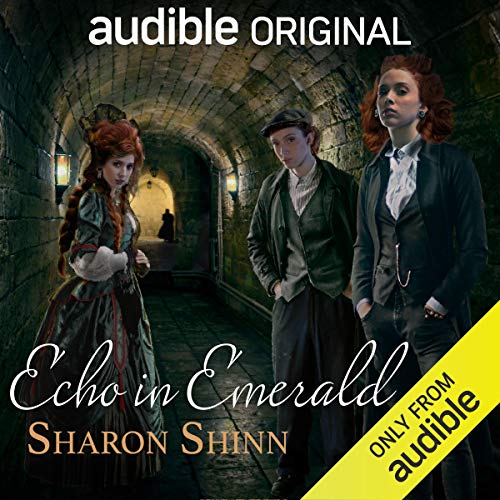 A Misfit and a Mystery

In the royal city of Camarria, a street urchin named Chessie lives by her wits, always attended by her two faithful friends, Red and Scar. What no one realizes is that the “friends” are really echoes, creatures that look exactly like their originals but who possess no volition of their own.

Echoes normally are only born to high nobles, and Chessie doesn’t want anyone to start asking questions about her past. So she’s developed the ability to move between bodies so rapidly that she can maintain the illusion that she and Red and Scar are three separate people.

After someone tries to murder the crown prince, Chessie gets entangled in the investigation when she comes to the aid of Lord Dezmen, the high noble who’s trying to solve the crime. From the back alleys of Camarria to a society party to a rural province, they track down clues.

Until one of those clues leads right back to Chessie.

PLEASE NOTE: When you purchase Echo in Emerald, you’ll also find in your Audible Library a map which will help you explore the world of the Uncommon Echoes series.

What listeners say about Echo in Emerald

Loved every minute! Ready for the next one! Kept me spellbound the whole time! Don't want to give any of the plot away so you too can enjoy.

I am a huge Sharon Shinn fan, so I preordered this trilogy, and I’m loving it so far! Definitely she is tackling some darker themes, and the whole idea of the echoes is very interesting and novel (and timely with regard to ideas of robots and consciousness). This series seems like maybe she was given freer rein when writing—there are some steamier scenes (nothing objectionable, just more than she has done before) and some darker plot points (murder/execution in the first of this trilogy, multiple murders and a mafia-type setting for this one). Above all of that, though, this book just grabbed me. The narrator has done a phenomenal job (nothing is distracting to the reader, her voices are all enjoyable and distinguishable from one another) and the whole setting and plot kept me guessing and wondering all the way through. I listened to this almost straight through on a 15 hour drive and it was wonderful. I will definitely listen again to catch everything I might have missed the first time, and I’m sure I will buy this in print when it comes out, but this audible exclusive release was a good fit for the content, I think, and a great addition to her body of work!

I really enjoyed this story - again great characterization, lots of political intrigue, and a bit of a mystery. Can't wait to listen to the next installment in the series.

I so loved the first book in the series, Echo in Onyx, that I couldn't wait to read this one. The main character Chessie has been on her own a long time, her mother dead and her father doesn't even know she exists. Chessie has a different relationship with her echoes than Brianna in the first book that adds a whole new dimension to the "echo" theme. Chessie has an unusual ability to slip back and forth between her two echoes...she can be the original or, at will, she can be in the mind and body of Scar or Red. It's a very clever device that enables to her slip in and out of tricky situations, yet it presents its own dangers. The story begins as seemingly an ordinary murder mystery with Chessie investigating certain culprits and saving a Lord Desmond, who almost become the second noble to be killed. After this, this story really takes flight when Chessie learns shocking details about her past and realizes her own life may be in danger. This one's a thriller.