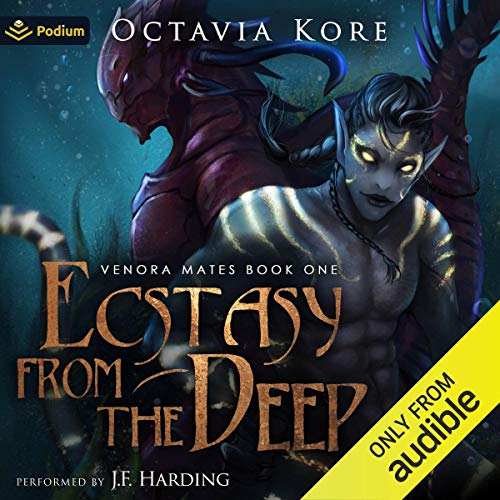 An enticing savior, an old love, and one deranged alien hell-bent on destroying it all.

The seemingly endless war with the Grutex has caused many inconveniences for Amanda, but none of those have been as bad as losing the funding for the project she is working on, which is supposed to help save humanity. When she foolishly risks her life to continue her research, Amanda is thrown into the path of an alien, the likes of which she has never seen, who claims she is his mate. The problem is, he isn’t the only one making that claim.

As an ambassador for his people, Oshen is used to handling delicate situations, but he has never been in one quite so delicate as this. Instead of enlightening Earth’s government about the existence of Galactic Law and their right to seek aid, he finds himself face-to-face with the one being he’s waited his whole life to find; his mate. But the little human is in trouble, and he needs to convince her to leave Earth or he risks losing the most important thing he has ever had.

Damned. Cursed. Gulzar has been called many things over the course of his life. Many in his tribe refuse to even look at him, and who could blame them? The only light in his life has been his little goddess, the only being in the entire world who looks at him without judgment. When he gets a vision of her in distress, Gulzar knows he will do anything he can for the female he loves.

This is an MMF romance with dark tones that may contain triggers.

What listeners say about Ecstasy from the Deep

It's a really good balance of interesting story, humour, HEAT, characters that are believable and more serious moments. DON'T LET THIS BE A CLIFF HANGAR!

I almost did not get this due to the reviews I read.... not sure WHAT those people were talking about! This is an EXCELLENT story!! It has become one of my favorites, the narrator was AH-MAZING! There was romance, hot steamy parts, funny moments. All around it was a solid book. I have become a fan of Octavia Kore.... please, please, PLEASE produce more of your books (you absolutely must keep the same narrator though!)

love the book when I originally read it, and love the audiobook because the actor is awesome! can't wait for more books in this series!

Great story. The only thing that was weird was June’s voice. She is supposed to be Pilipino but she sounds Jamaican. That voice grated on my nerves. The rest was good and the narrator’s main voice was nice. The secondary characters voices were so weird.

So, I started this review with 3 hours to go in the book and gave it a very generous four-star review. Since then, the book and my review took a nose dive! Her mates are taken away and the most she does is ask about them as the days go by and when she doesn't get an answer, she just goes on about her day. All the while one is in a holding cell and the other is being beaten. I am only finishing this to ensure my review is 100% accurate. UGH!
I like the new species and the story. But, highly dislike damsel in distress heroines. And, I dislike it, even more, when that damsel is wrapped in a profession that requires "brains". She makes marine biologists cringe
. The best part of the story is Hades!
Not sure why they chose a male narrator. Most of the story is from a female perspective and J.F. Harding fell short with female narrations.
I would not recommend this book to anyone who likes strong, capable, kick-a** heroines.