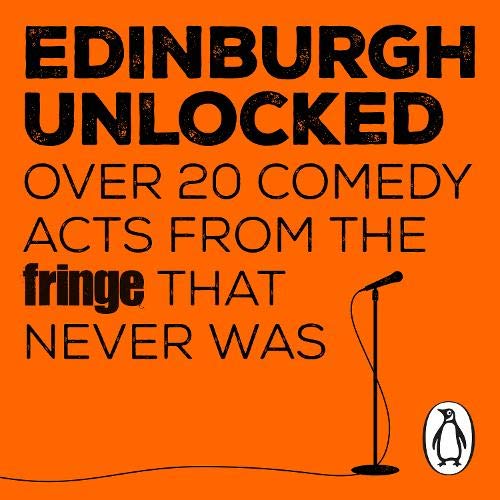 The show has been called off. The show must go on....

Containing nearly eight hours of hilarious original material from some of the finest comedians on the circuit, listeners can laugh along as Jordan Brookes (Winner of Edinburgh Comedy Awards 2019) takes you on a disastrous guided meditation session, Sofie Hagen (Comedy Central, Live from the BBC) lifts the lid on her Westlife fan-fiction days and, just as Shakespeare did during the plague, Ivo Graham (Have I Got News for You, Mock the Week) tucks into his version of King Lear during the lockdown.

Featuring household names, through to debut acts, as well as being compered by Scotland’s very own Fern Brady (8 Out of 10 Cats, The News Quiz), Edinburgh Unlocked is the unmissable comedy festival that you can attend without leaving your living room.

What listeners say about Edinburgh Unlocked

It can't replace the fringe but it has a damn good go. Really great line up, really nice range of comics and styles. Even if one act isn't for you there's always something good coming round the corner. Definitely worth a download.

Hit and miss - and why no named chapters?

As would likely be expected with 20 comedy performances, this is a bit hit and miss - although with more hits than misses. Ivo Graham, Lou Sanders and Fern Brady herself were among the highlights - along with the guy who read his micro novels.

Some parts come across better than others. The drag act is well intentioned but it simply didn’t work within the medium for me.

It would be much better if each act was identified in the chaptering, or through the product description. There’s no easy way to find out who’s who apart from the initial introduction. Other Audible titles have names for chapters, so I don’t know why this doesn’t.

There was an Edinburgh Fringe gaping hole in my heart this August, I have loved going up and watching comedians and shows most Summers... but having listened to this audiobook it has bought the comedians right to my house! Loved every minute. Bravo.

Edinburgh in your ears!

Half way through this already and it's absolutely hilarious! From established acts, through to newcomers, this is what the Fringe is all about. So much creativity to enjoy here with binaural sound, SFX, and genuinely brilliant material. What a show!

This is amazing. Get it now.

Wow, what a collection this is. Everything is totally on point and amazing. I've heard great things from a few new people that I wasn't aware of before and some absolute greatness from some of my favourite comedians. Kemah Bob's set is particularly poignant given what's been happening and is one of the most heartfelt sets I've ever heard and who doesn't love a bit of John Kearns. Everyone should check out Shelf as they are absolutely amazing and sofie hagen is one of my favourite people on this planet. Again, just get this. If you're a comedy fan you'll wet your knickers laughing.

Funny in places. Alas I’ve yet to visit those places. I miss the flyers, I miss the rain

If the Covid pandemic got you down this will finish you off!

I bought this to cheer me up during the pandemic but unfortunately just listening to this was even more dreary than BBC news.

The “comic “ who introduces others is from my part of the world, so I expected no problems in understanding her. Unfortunately her dreary delivery and habit of becoming softer and quieter towards the end of sentences made her difficult to understand the “punchlines “ ( if there were any....)

Perhaps things have moved on with comedy. I’m used to comics making me laugh. Not one of these performances was particularly funny. Mainly smart comments on society and boring anecdotes.

Perhaps it is just as well Edinburgh was not subject to this dirge this year as it is all too gloomy and dull!

Ok but not great

Probably an accurate reflection of what it’s like going to the fringe. A little hit and miss.

An innovative response to Coronavirus shutting down Fringe this year! What an absolute bloody hoot!