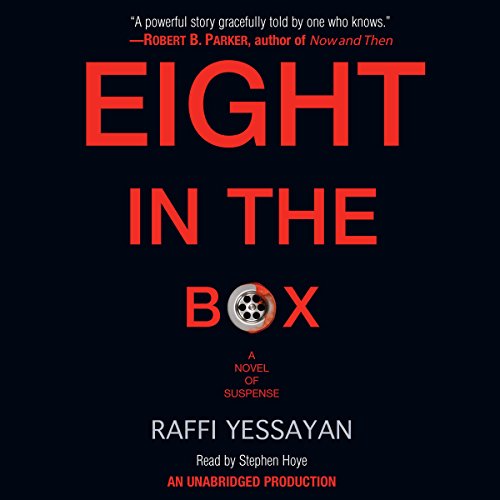 Eight in the Box

They call him the Blood Bath Killer - a man who has now killed two Boston women by sneaking into their homes, filling the bathtub with their blood, and making off with their bodies. And everything suggests that he's poised to strike again.

Out to stop him are two good cops - Detective Angel Alves and his hard-driven boss, Sergeant Wayne Mooney - and waiting in the wings to provide justice is a team of young prosecutors led by Assistant District Attorney Conrad Darget. His team, a Homicide Response Team featuring attorneys handpicked by the DA to represent the office at all murder scenes, is managed by the dedicated Liz Moore and consists of a diverse group, from the erudite but troubled Mitch Beaulieu to the aggressive but so-far-unsuccessful Nick Costa to the hard-working and principled Brendan Sullivan.

But as the bodies continue to disappear, the case becomes more personal, difficult, and dangerous for everyone involved. First, a victim turns out to be a childhood friend of Alves's. Then, it becomes clear that the only connection between victims is time spent on juries at the South Bay District Courthouse - the Homicide Response Team's headquarters - which means that the killer is among them.

A gripping first novel distinguished by breakneck pacing, accessible prose, and intriguing detail of the world of criminal law, Eight in the Box will thrill all fans of commercial suspense.

“Raffi Yessayan’s Eight in the Box is an awesome, chilling legal thriller. It took me back to the days when I was chasing down the darker elements with Eddie Egan and Sonny Grosso while researching and writing The French Connection. Yessayan may be the best prosecutor-turned-crime-writer to hit the streets since George V. Higgins and Scott Turow.” ( Robin Moore, author of The French Connection and The Set Up)
“With its superb dead-on dialogue and criminal procedure so authentic I felt as if I had slipped under crime-scene tape and disappeared into an underworld meant only for cops and killer, Eight in the Box had me hooked and on the edge of my seat from page one. This is one of the most shocking and accurate crime novels ever written.” (Andrew McAleer, professor of crime fiction, Boston College, and author of Mystery Writing in a Nutshell)
“If you enjoy baffling murders investigated by credible, indelible homicide detectives and prosecutors, you’re going to love Eight in the Box. A onetime assistant district attorney in Boston, Raffi Yessayan conveys both an air of authenticity and a sense of dedication in describing the men and women who must ‘speak for the dead'. This is a wonderful debut crime novel.” (Jeremiah Healy, author of The Only Good Lawyer and Turnabout)