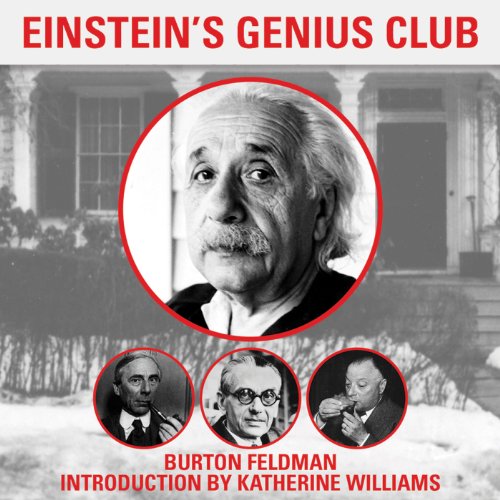 Burton Feldman and Katherine Williams' Einstein's Genius Club: The True Story of a Group of Scientists Who Changed the World is a fascinating glimpse into the lives, minds, and relationships of four great philosophers and scientists: Albert Einstein, Bertrand Russell, Wolfgang Pauli, and Kurt Gödel. Feldman and Williams have constructed a work that functions both as historical account and speculative analysis of how these great men interacted, especially in the wake of the global devastation and rebuilding that followed the conclusion of World War II.

Voice actor Victor Bevine's careful pacing accentuates the intellectual drama inherent in this fascinating audiobook, giving voice to the fears and jealousies that dictated the relationships between some of the best minds of a generation.

From the acclaimed author of The Nobel Prize comes this fascinating portrait of four of the greatest minds in the history of science and the impossible turning point they faced.

As World War II wound down, and it became increasingly clear that the Allies would emerge victorious, Albert Einstein invited three close friends - all titans of contemporary science and philosophy - to his home at 112 Mercer Street in Princeton, New Jersey, to discuss what they loved best: science and philosophy. His guests were the legendary philosopher and pacifist Bertrand Russell; the boy wonder of quantum physics, Wolfgang Pauli; and the brilliant logician Kurt Gödel. Their casual meetings took place far from the horrific battlefields of the war and the (then) secret lair of experimental atomic physicists in Los Alamos, New Mexico.

Using these historic meetings as his launching pad, Feldman sketches the lives and contributions of the four friends, colleagues, and rivals - especially Einstein, innately self-confident but frustrated in his attempt to come up with a unified theory, and the aristocratic but self-doubting Lord Russell.

Masterfully researched, this book accessibly illuminates the feelings of these notable men about the world of science that was then beginning to pass them by, and about the dawning atomic age that terrified them all.

"Illuminating biographical sketches of these men and their earlier, groundbreaking work.... It sheds light on a moment when architects of the early 20th century’s most important discoveries in science and logic could only stand by and watch as their scientific discoveries directly affected events. (Publishers Weekly)

A launch pad ONLY!

I gave 5 stars because the history covered is so fascinating, but don't expect the book to be about rambling discussions the four great minds had at Einstein's home. That scenareo is used by the author only as a "launching pad" to the lives of the four men. Very little time is spent on these undocumented meetings. Still, great history.

A must listen about modern physics

This book gives a very good insight about the scientists who shaped modern physics. The people are the contemporaries of Einstein and the time they lived in.