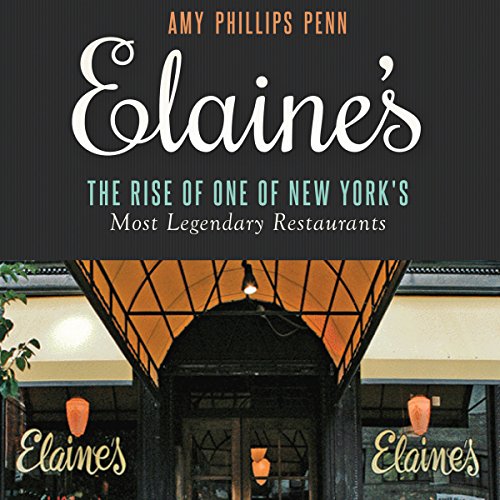 Elaine's was a world-famous New York restaurant that became home to writers and celebrities. Owner Elaine Kaufman was known to be "New York feisty", controversial, often rude, always blunt, with the flare of Gertrude Stein and Dorothy Parker. Elaine was highly respected and frequently feared, and Elaine's the restaurant received the public's love and praise time and time again. Woody Allen held a regular table there, and Elaine's was even featured in Allen's Manhattan and Billy Joel's song "Big Shot".

Elaine passed away in 2010, forcing the restaurant manager to close shop shortly after. "There is no Elaine's without Elaine", she decreed. However, the memories remain and are recalled by a variety of Elaine's regulars in this moving, oftentimes amusing collection of personal essays.

I like learning the reality of the settings of books I've read. Very good book.

Elaine’s was a mess. The food was expensive and they were mean people.
Often they were apt to not wait on you at all!
Pmammon

ELAINE'S " Where everyone knew her name"

Would you consider the audio edition of Elaine's to be better than the print version?

Not necessarily. The voices were very flat!

It's hard to say there were many.

Have you listened to any of Nicol Zanzarella and Johnathan McClain ’s other performances before? How does this one compare?

I think "CHEERS" already did, don't you?

WISH I COULD HAVE BEEN THERE TO MEET THAT WONDERFUL LADY!!!

ELAINE WAS ONE OF A KIND<br />

Utterly adore this book, and I wish Elaine had been my MOMA also!!!
Amy Phillips Penn brings forth the ambiance, the heat, & star studded qualities of this remarkably, unique character, Elaine, who can never be replaced.