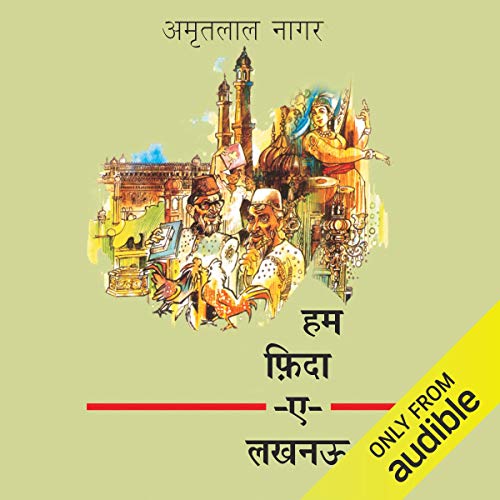 Hum Fida-E-Lucknow [I Am in Love with Lucknow]

Amritlal Nagar is considered as one of the most prominent Hindi writers of the 20th century. His ability to create relatable and multi-layered characters comes from his experience as a journalist where he researched and interviewed several artists and brought out different aspects of their personality. He worked for All India Radio and also wrote several films. Most famous as a novelist, his important works include Boond aur Samudra, Suhaag ke Noopur, Maanas ka Hans and Nachayo Bahut Gopal.

Hum Fida-e-Lucknow is an anthology of stories written by Amritlal Nagar where he weaves fictional narratives around the many colourful characters that one could easily find in the city of Lucknow. As the place where he spent almost all his life, his fascination, love and memories of Lucknow come together in this work. In the 14 stories presented here, he tries to address various colours of Lucknow - each unique and different and yet connected in some way. His language has that rare ‘Lakhnavi’ humour that only someone who has lived in Lucknow for so long can acquire and appreciate in its entirety. He introduces the listener to a series of charming and vibrant characters in stories like ‘Nawab Sahab’, ‘Banafsa Begum ke Noor-e-Nazar’, ‘Haji Kulfiwala’, ‘Khatakin Bhabhi’, ‘Humare Padosi Munshi Bakhtawarlal’ and ‘Nazeer Miyan’ while also providing a detailed account of the culture, society and everyday life of the city, laced with his wit and humour, in stories like ‘Chakallas', ‘Peepal-Pari ki Dastaan’, ‘Julab ki Goli’, ‘Shahar ka Andesha’, ‘Dafeene ki Khudayi’, ‘Lakhnavai Holi’ and ‘Jantar-Mantar’.

Very poor reading of a great book; the pronunciation of the words was horrible and simply spoilt the experience.