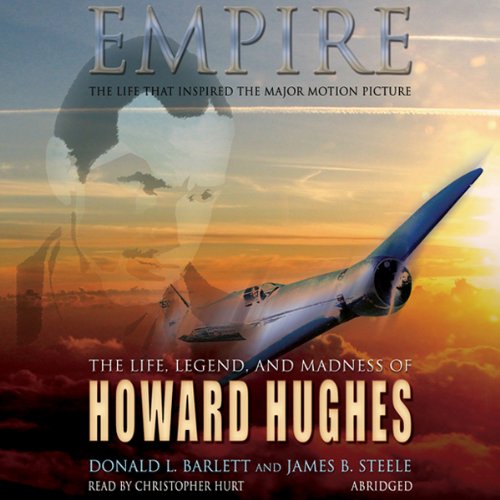 Howard Hughes lived one of the greatest, most heroic, misunderstood, mysterious, bizarre, and tragic lives in American history. In this brilliantly documented biography, the mythology that surrounded that life is disentangled from the truth.

Hughes had always been different. Certainly his riches set him apart, but he was also tough. Orphaned and a millionaire at 18, Hughes repudiated his relatives, seized control of the Hughes Tool Company, the linchpin of his fortune, and went on to become a flamboyant movie producer, holder of many world aviation records, principal owner of Trans World Airlines, a critically important defense contractor, Hollywood's most pursued and elusive bachelor, and partner of the United States government.

This is an epic biography of an epic figure who bestrode the world like a colossus yet could not master himself.

"Of all the books written about Howard Hughes, Empire is easily the best...." ( New York Times Book Review)
"A remarkable job of investigative reporting....cracks Hughes's public persona as it disentangles the psychodrama of his private doings...." ( Publishers Weekly)
"[The] most responsible and authoritative biography of Hughes to date." ( Newsweek)

What listeners say about Empire

As much as I enjoy biographies this abridged version wasn't put together very well. The narrator was marginal and judging from what was spliced together from the full book, I would recommend the unabridged version.

Interesting book about a fascinating man

Interesting book about a fascinating man. He was a genius and a visionary who wasn’t properly diagnosed or treated - in fact, seems his doctors were delinquent and negligent in his care, rather content to continue milking him for his money rather than trying to cure him. One has to wonder what other advances or technological improvements he would have made had he lived longer.

I'm not sure if it was just my download but it seemed like there were two narrators on this book (and I'm not referring to when he's talking as Hughes or others. ). Just something weird about the narration

Only wish the ending detailed out what happened to his estate and his companies.

Wikipedia states his estate is worth over $10 billion...unclear as to how this happened

Interesting, fluid account of the man they called HRH. Good reading too.

There is a peculiar and unfortunate production technique used in the audobook. The reader speaks with two different voices, as if two people are reading the book in turn. Presumably this is meant to add emphasis or something. But its just annoying.

Nonetheless its still worth listening to.