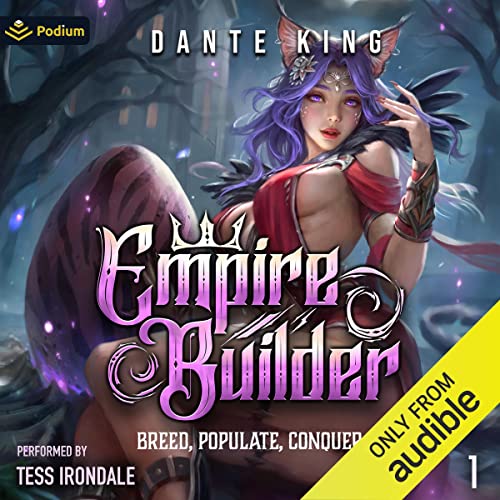 When Benjamin's latest conquest revealed herself to be from another world, he couldn't believe it. But her crazy revelations didn't stop there. She said that Benjamin was the reincarnation of the Forgotten Ruler, a supreme being with an empire that once spanned an entire continent.

Now, he's traveling to that fantasy world with one goal in mind: rebuilding his empire, one monstrous offspring at a time. Move over Sauron, Benjamin Davies is the next dark lord of fantasy.

You know those anime that are complete trash but you like them anyway? That is this book. Actually, calling this complete trash is too harsh and I mean it almost endearingly. I like the story, I love the girls, and I especially appreciate that there aren't any of the endless and pointless stat screen readings like in most LitRPGs. Unfortunately, the dialogue is cheesy, cringy, and awkward. The character interactions really spoil the potential of the book, I'm afraid. But as I said. if you take it in stride and enjoy it like you would a trashy anime, then you will get a lot of entertainment from this audiobook. And let's face it, you didn't pick this book for quality, you picked it for the cover. As for the narrator, she did a good job, although her version of the male MC mainly made him sound like a complete dork trying to be a tough guy, which made it even harder to take the book seriously. in short, it is worth a credit but don't expect a masterpiece.

I didn't finish the story. Story and plot are weak. The narrator is the only saving part of the story.

Great first book in the series and looking forward to more

I have listened to several of this authors books and can say that this is one of his best works. The main character has flaws and is interesting. The supporting characters are each unique and yet provide a great balance to the main character.

I am greatly looking forward to the next book in the series.

I really enjoyed this book and it fills that fantasy itch in your body without having an overly complex story and characters. simple and enjoyable.

tess irondale dose a great job on this book. the story is good. however Dante king has a bad habit of putting in pop culture references. how ever in this story the mane character aculy trys to stop using them and for the most part stops half way threw the book.

i loved it ready for next book, audio book glad I already bought all 3

didn't agree with me

struggled to finish. Mc poses an objection toa moral dilemma then proceeds to do what he found objectionable.

not worth the read.

pace is slow and the book trudges along. if I could get a refund I would. I didn't make it more than a couple hours in.

At first I wasn't I would like it as the start was heavily R rated you could say, but as the story progressed I fell in love with it!

was almost worth the free credit

not particularly engaging, repetitive and unimaginative RPG lit. Far too little creativity in the RPG side and it felt lazy with a lot of 'just like in dnd' or 'just like in a fantasy movie'