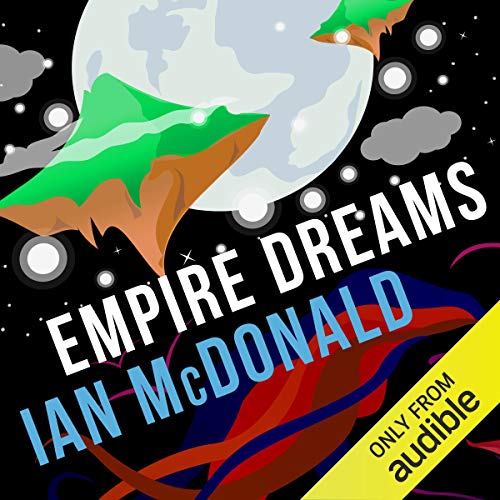 Published simultaneously as Desolation Road, the Empire Dreams collection was intended to exploit the author's nomination for the John W. Campbell Award for Best New Writer in 1985. It collects the following stories:

"One of the most interesting and accomplished science fiction writers of this latter-day era, indeed maybe the most interesting and accomplished, and certainly the most culturally and musically sophisticated, the Frank Herbert, William Gibson, or arguably even Thomas Pynchon of the early 21st century.” (Asimov’s)
“I will read anything that man writes - he is the most underappreciated genius working in the field today.” (Cory Doctorow)
“McDonald’s power as a storyteller lies in his stylistic versatility and intensity of language as well as in his capacity to create vivid and memorable characters.” (Library Journal)

What listeners say about Empire Dreams

An excellent sampler of McDonald's work

Over the past few months I’ve read seven novels by Ian McDonald and have appreciated his thoughtful and beautifully written stories. I admired all of them, even those that I didn’t particularly like. McDonald’s stories are unique, many have exotic settings you can get immersed in, and most have fascinating science fiction ideas while also portraying poignant human struggles.

Empire Dreams (1988) is a sampler of ten of McDonald’s short stories and novelettes that offer fans and new readers a few glimpses of the author’s brilliance and versatility. The first five were originally published in Asimov’s Science Fiction and Fantasy Magazine and the rest are original to this volume:

“Empire Dreams (Ground Control to Major Tom)” — (Originally printed in Asimov’s, December 1985) This novelette is about a new medical technology that uses a virtual reality game to let oncology patients fight their cancer. A boy who just lost his father is the first patient to try the new treatment. The world watches his mother sit by his hospital bed while, internally, the boy and his dead father try to defeat the cancer in Star Wars fashion. This is a touching story about losing parents.

“Scenes from a Shadowplay” — (Asimov’s, July 1985) In this clever revenge story, a famous Venetian composer orchestrates the murder of a rival using automatons built by his disinherited clone-brothers. I loved the science fiction elements in this story and wish McDonald would write more in this world.

“Christian” — (Asimov’s, October 1984) This strange novelette is about a boy who befriends a man named Christian who flies kites on the beach and tells stories. The kites, and Christian himself, are not what they seem. In one of the stories Christian tells, we see the pain-free society that McDonald will write about later in his novel Out on Blue Six.

“King of Morning, Queen of Day” — (Asimov’s, May 1988) I loved this novelette about an upper-class Irish family in the early 20th century. The father, Dr. Desmond, is scorned by his scientific colleagues when he discovers a comet that he insists is actually an alien spaceship. As he measures its progress toward Earth and designs an apparatus for communicating with the aliens, he worries about his daughter Emily who imagines that the woods around their house are inhabited by faeries and she has become their queen. This story is drenched in irony as the characters use their own beliefs and biases to try to explain the other characters’ odd behavior. It also shows McDonald’s breadth of style, as it’s written in a completely different manner than most of his other work. This novelette is related to McDonald’s novel King of Morning, Queen of Day.

“The Catharine Wheel (Our Lady of Tharsis)” — (Asimov’s, January 1984) This novelette is related to the novel Ares express in which a terraformed Mars is traversed by nuclear-powered trains. The story has two viewpoints. The first is a young boy who is accompanying his engineer grandfather on the last voyage of a train that was named after Saint Catherine, an “angel” of Mars who once saved the train from a disaster. The second viewpoint is the young disillusioned Saint Catherine while she was still on Earth and trying to figure out how to abandon the flesh to achieve true spirituality. As with so many of his stories, this one is clearly inspired by the religious wars and terrorism of McDonald’s native Belfast.

“Unfinished Portrait of the King of Pain by Van Gogh” — When the King of Pain asks Vincent Van Gogh to paint his portrait, Van Gogh thinks he must be going mad. As he sits for the portrait, the King of Pain tells Van Gogh stories about a pain-free society and even gifts him with some of his magic. McDonald cleverly uses this premise to explain some of Van Gogh’s personality, history, and art. This charming novelette, which is closely related to the aforementioned novel Out on Blue Six, deals with the problems and purpose of pain. It was included in two “Year’s Best” anthologies edited by Datlow and Windling.

“The Island of the Dead” — In this bittersweet short story, a man goes to visit the Island of the Dead on Halloween, the one night each year that the dead may rise and return to their mortal bodies. He is looking for his dead wife, but finds something else. This lovely science fiction story is about moving on after death.

“Radio Marrakech” — This is another story about death — specifically about burning out versus fading away. In Marrakech, a draft-dodging beach bum meets an improv artist who seems like she’s full of life, but it turns out that there’s a catch to her vitality. McDonald does a great job with the neuroscience here and it’s an interesting consideration about quantity vs. quality of life.

“Visits to Remarkable Cities” — Three travelers share tales about remarkable cities they’ve been to. Each tale has something to say about human nature and taken together they say something even more profound.

“Vivaldi” — This novelette is about an astrophysicist involved in a space voyage to investigate a black hole. As he considers the vastness of space and what a collapsed star tells us about the death of the universe, he relates his findings to events going on in his life. This touching story, which juxtaposes the immensity of the universe with our tiny personal experiences, nearly brought me to tears.

Every single one of these stories is weighty and moving. There are several repeating themes here — mortality, loss of loved ones, vibrancy of spirit, the purpose of pain — which make me wonder what McDonald was going through when he wrote these stories in the mid 1980s. Certainly “The Troubles” in Northern Ireland were an inspiration.

But despite their similarity of theme, each of the tales has a different setting, tone, and voice and together they are a good representation of the depth and breadth of Ian McDonald’s work. This is a great place to start for readers who’d like to sample what McDonald has to offer and I’d consider it a must-read for established fans.

I listened to Audible Studio’s version of Empire of Dreams. It’s 8.5 hours long and narrated by English actor William Gaminara. I was impressed by Gaminara’s performance. He has a beautiful voice and he brilliantly handled the diversity of tone and cast in this collection. I’m certain that his reading added to my enjoyment of these stories.