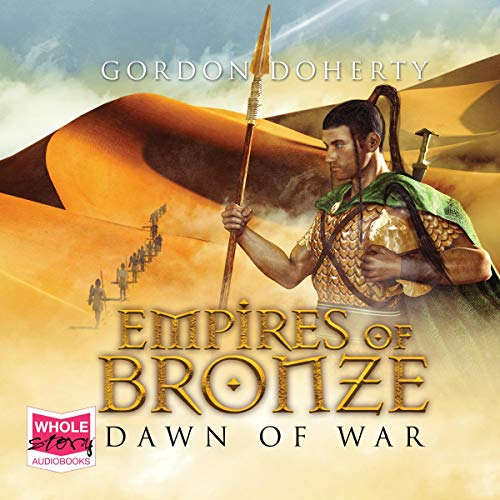 Empires of Bronze: Dawn of War

A world on the brink of war, a great warrior hell-bent on peace.

1294 BC: The fragile accord between the Hittites and Egypt is crumbling and the ancient world braces itself for war. Prince Hattu, General of the Storm Division and hero of the Hittite people, can only look on in horror. For the Goddess Ishtar – his protector and tormentor – taunts him with dreams of terrible consequences: of his closest and most-loved one dead in his arms. He refutes her prophecies and swears to her that it will not be: no war with Egypt and no loss.

But sometimes to fend off a great evil, a man must delve into the blackest of pits. And so Hattu must journey to the distant and volatile Egyptian borders to prevent this war before it truly begins. Yet the further he ventures, the darker and more twisted his journey becomes. Old ghosts rise around him and Ishtar haunts his every move. The Goddess cannot be denied, men say. Hattu will walk through fire to prove them wrong.

Exciting tale with a less than satifying ending

I have been looking forward to this for months. I loved the first novel in this series. The characters are admirable, noble, loyal and brave. The author can certainly make battle scenes come alive. The relationships among the characters is finely drawn and the setting very exciting. I wonder if the novel has a map of the area. I think of Egypt to the west of the Hittite lands but the author describes them as east. However, I find the villain too much of a caricature of someone who is barely human and the ending was disappointing. At least we know there will be a third installment and that is surely good news.

Great Story, Great Book..love this historical era, doesn't seem to be covered a lot in recent historical fiction novels.
Jonathan Keeble should do all audiobolks!

The earth will shake and fall to dust

This is an incredible listen continuing on from the previous book and tying up threads from it while continuing the narrative and giving further depth to the ever shrinking hatti world. There is a sense of doom in the world. The earth shakes crops wither and neighbors grow restless and warlike. An square in the middle of it Hattusili attempts to save his world and must take an odyssey of his own to return to the ones he loves in their time of greatest peril. Also Jonathon Keeble does this book the justice it deserves as always it may be because he’s my favorite narrator or the book is just amazing but parring the two will take you back 3,000 years and introduce you to a world shared but not oft experienced or spoken of in modern perception.