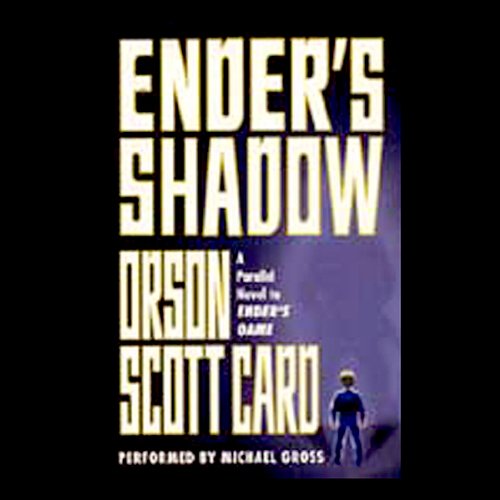 From the author of Ender's Game, the Hugo and Nebula award-winning international best seller, comes the parallel novel, Ender's Shadow. In the first book, child-hero Ender Wiggin battles a deadly alien race and wins. But Ender wasn't the only child in his Battle School. There was also Bean, the one who became Ender's right hand, his strategist and his friend, the only one who was with him in the final battle. Now Card tells Bean's whole story, while expanding and complementing the earlier tale.
©1999 by Orson Scott Card (P)1999 NewStar Media Inc.

I won't rehash what's been said about the book itself already; if you liked Ender's Game, you MUST read Ender's Shadow. And I do mean read, not listen. This was the first audiobook I ever stopped listening to halfway through because it was so aggravating.

First off, the narrator seems to be whispering most of the time, and turning up the volume might cause your speakers to blow or eardrums to bleed when he does speak loudly. Also featured in the production is a fellow with such a deep voice he puts James Earl Jones to shame. I believe he narrated Ender's Game as well, and I didn't like him then either.

Secondly, having read the actual book before, I can say without any doubt that this abridged version is a real hatchet job. Authors normally abridge their own works, so I can't imagine why Card would cut out so many key scenes of his story. Without giving anything away, gone is Bean living with Sister Carlotta, gone is Bean's first meeting with Petra, gone is the whole initial exploration of the air vent along with the explanation as to why Bean is doing unusual excercises...

It was at this point that I gave up out of sheer frustration. Read the book!

I've actually read this book before. It is an awesome book and the audio is okay but the abridgement cuts out segments about some subjects while leaving them in later. Certain sections of the bookmake no sense because they randomly drop parts of conversations between people or events but not the thought process afterwards.

the listen is still pretty good. The book itself is great

If you hunger for more of Ender's Game

Ender's Shadow is a nice companion book to Ender's Game. If after reading Ender's Game you hunger for more of the same "like I did" Ender's Shadow will do. Although, I was disappointed that it wasn't unabridge, I felt the need to go out and buy the book to fill in the obvious gaps. The next book in the Shadow series is Shadow of the Hedgemon, and It is excellent! The weakest and latest book in the series is Shadow Puppet, But you get so attached to the characters that you just have to buy it. I suggest reading the shadow series before buying Speaker for the Dead, if you have a hard time with Ender's character aging significantly by the time Speaker for the Dead takes place. The Enderverse book also helps to bridge the age gap.

If you have listened to the other Ender books then you might find this one a little disappointing. The story is fine and the narration is good, but you can tell that this book is abridged.

While the style is like Card's other Ender books, this one seems rushed and does not flow like the others.

Tinny, raspy, and very hard to listen to.

Harsh on the ears

While I love Orson Scott Card's books, this production, which was recorded in the highest compression--lowest quality audio, is painful to listen to even if the story fills in many gaps that the other Ender series don't. The sound is tinny at best--like listening to it through a cheap phone. Nonetheless, this will set you up for Shadow of the Hedgemon, which was a terrific book that I listened to out of order because I didn't know that this Shadow book existed.

Until they come out with a version that is unabridged and recorded in higher fidelity, or you want to read the book, this may be the best you can get. I've not completed my listening, but wanted to warn others about the audio quality and not the story itself.

Bean is the man.

This is a brilliant character. One would never have imagined such complex workings happening behind the scenes in Ender's game. One wants to know Bean more and more and more.

As I very much enjoyed Ender's Game (even thought it wasn't the type of book I normally pick), I was disappointed in this 2nd book. By itself, it is probably a pretty good book, which is why I rated it as high as a 3. But I found listening to it soon after finishing Ender's Game pretty boring. Save your money. Though I still have about an hour left until the end, alot of the book is near identical to Ender's game from just a bit of a different viewpoint. While some people have complained that it is TOO abridged ... I feel like only the 1st hour (maybe 2) and last is worth calling a new book.

Great listen - if you can hear it

Audible needs to upgrade this recording so "Ender" fans can hear Bean's story of Battle School. Format 2 is nearly unlistenable.