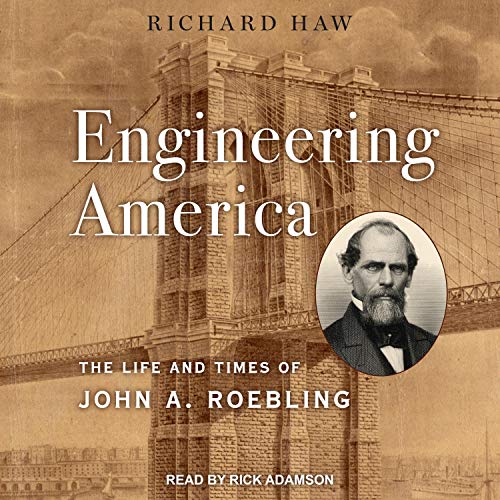 John Roebling was one of the 19th century's most brilliant engineers, ingenious inventors, successful manufacturers, and fascinating personalities. Raised in a German backwater amid the war-torn chaos of the Napoleonic Wars, he immigrated to the US in 1831, where he became wealthy and acclaimed, eventually receiving a carte-blanche contract to build one of the 19th century's most stupendous and daring works of engineering: a gigantic suspension bridge to span the East River between New York and Brooklyn. In between, he thought, wrote, and worked tirelessly. He dug canals and surveyed railroads; he planned communities and founded new industries.

Like his finest creations, Roebling was held together by the delicate balance of countervailing forces. On the surface, his life was exemplary and his accomplishments legion. As an immigrant and employer, he was respected throughout the world. As an engineer, his works profoundly altered the physical landscape of America.

Roebling's engineering feats are well known, but the man himself is not; for alongside the drama of large scale construction lies an equally rich drama of intellectual and social development and crisis, one that mirrored and reflected the great forces, trials, and failures of 19th-century America.

What listeners say about Engineering America

story of a gifted engineer with social short comin

this is an amazing piece of history tying in the social decisions at the time with an extremely talented engineer. I wholeheartedly enjoyed and recommend this book