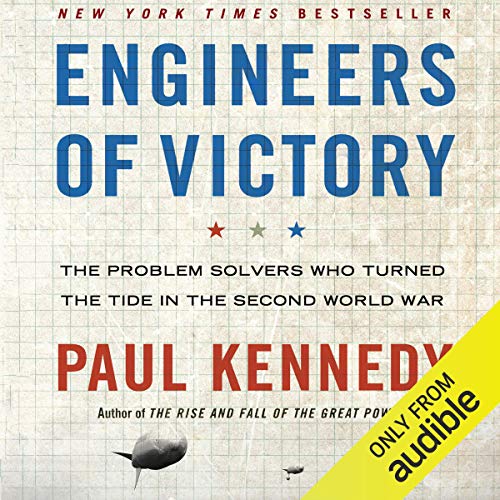 Paul Kennedy, award-winning author of The Rise and Fall of the Great Powers and one of today’s most renowned historians, now provides a new and unique look at how World War II was won.

Engineers of Victory is a fascinating nuts-and-bolts account of the strategic factors that led to Allied victory. Kennedy reveals how the leaders’ grand strategy was carried out by the ordinary soldiers, scientists, engineers, and businessmen responsible for realizing their commanders’ visions of success.

In January 1943, FDR and Churchill convened in Casablanca and established the Allied objectives for the war: To defeat the Nazi blitzkrieg; to control the Atlantic sea lanes and the air over western and central Europe; to take the fight to the European mainland; and to end Japan’s imperialism. Astonishingly, a little over a year later, these ambitious goals had nearly all been accomplished. With riveting, tactical detail, Engineers of Victory reveals how.

Kennedy takes readers behind the scenes, unveiling exactly how thousands of individual Allied planes and fighting ships were choreographed to collectively pull off the invasion of Normandy, and illuminating how crew chiefs perfected the high-flying and inaccessible B-29 Super fortress that would drop the atomic bombs on Japan.

The story of World War II is often told as a grand narrative, as if it were fought by supermen or decided by fate. Here Kennedy uncovers the real heroes of the war, highlighting for the first time the creative strategies, tactics, and organizational decisions that made the lofty Allied objectives into a successful reality. In an even more significant way, Engineers of Victory has another claim to our attention, for it restores “the middle level of war” to its rightful place in history.

This book is not bad, really, but the content is so disappointing relative to what the title promises. I thought we might get some great detailed examples of the engineering challenges of WWII. Instead, we got a general overview of WWII with a glancing, superficial focus on broad engineering issues. The detail is so lacking in this book. Detail in the personalities of engineering is shockingly lacking. Basically for any engineering personality we get a name, a three-sentence biography, a one-paragraph summary of what the person did, and then we go back to the general history of WWII. I'm seriously thinking of returning this book for credit. If the book was advertised as being a general history of WWII with a soft emphasis on engineering, I could almost recommend this book. But as it is, I can't recommend it.

A Better Way of Getting Things Done

I am surprised at some of the reviews of this book. The definition of engineering can be "a calculated manipulation or direction" To me, the title does not suggest anything but what the author accomplishes in this book: a description and analysis of the major issues the allies had to overcome to achieve victory. It is not, as one reviewer mentioned, just another rehash of WW II.

I find that most wars and their component battles have been overly described (though I would except Rick Atkinson's from this). I can't even count the number of books describing the Battle of the Bulge and the Bastogne segment of it. I found this text to be a refreshing alternative to the typical descriptions. I suppose that you could just read it as another WW II book, but his description and analysis of the primary problems that the Allies had to find solutions to departs from the typical formula. As he says, the Germans didn't fail to try hard enough to win, but the Allies simply found "a better way of getting things done."

I also find that his frank and honest assessment of the uninspired, sometimes downright backward, thinking of the British and Americans almost brought about failure rather than victory.

I think that this book is an excellent read, and something different for anyone interested in the history of World War II.

While the idea of the book sounds very promising, the author says nothing of interest. It seems the author has done no work in finding anything worth sharing. This reads like a high school introductory article.

Awful performance of a so-so book

What disappointed you about Engineers of Victory?

A lot of time spent telling what was NOT gonna be covered. Little detail.

Has Engineers of Victory turned you off from other books in this genre?

The idea was great, the execution was poor. Performance made it worse.

Quit about 2/3 of the way through, couldn't stand the nasal bored narrator.

Moments of interesting but not enough

I assumed this would be more focused on the technological innovation but the author spends the majority of the time long, drawn out background and foreground around the change in technology. As a result, the book becomes an overview of World War II and the five theaters of war pertaining to it. Just not enough focus on technology engineered for me.

I want my money back

Long winded and repetitive explanations of what the book will cover; end of story
No content

Fails to deliver on promise

What disappointed you about Engineers of Victory?

About 10% of the book covers the announced theme - the contribution of mid level scientific, industrial, and military folks to allied victory. Another 20% could be a useful overview of the few selected campaigns.

What was most disappointing about Paul Kennedy’s story?

Unfortunately these useful nuggets are buried in a blizzard of factoids pulled from across the geographic and temporal spectrum both World Wars. The rest of the book is just fluff - the kind of B.S. or drivel used to fill up a third rate term paper.

Would you be willing to try another one of Stephen Hoye’s performances?

Stephen Hoye is one of my go-to narrators. Every word is pronounced and understandable; a bountiful joy of enunciation. As constructive criticism, his readings tend to be overly dramatic. The device is best used sparingly, reserved for passages deserving emphasis.

Paul Kennedy doubtless knows a lot of history. He is the kind of guy - high priced Yale Professor with big vocabulary - the Air Force might hire to lecture at the Air Command and Staff College for field grade officers. The book reads like he had brought two hours of material with him but had contracted to teach sixteen hours.

This book claims to take about the "engineers" or "problem solvers " of WW2. At best there is only a little bit of that. Mostly it's just a rehash of rather well known details with some interesting anecdotes to help tie events together.

His conclusion chapter is one of the worst "armchair strategist" items I have ever read. When I hear someone suggest that Imperial Japan should have captured the Hawaiian Islands (understood by the Japanese as both logistically impossible and counter to there basic war goal of a negotiated settlement) I tend to just start laughing at them.

I have listened to over 150 audible books. I try to at least give star ratings. I have only written 2 review, both for less than stellar achievements in writing. This is the second. Take the hint.

Dry, but some interesting points.
Would probably disagree about some of the blanket statements "strategic bombing worked".
Really like hearing about Ramsay and the "funnies".
Not as much tech content as I would've liked.

A great read for the details between the creation of the technologies and middle management that lead to the successful
battles of WWII.

Not much for the engineer

Not a great deal about engineers or any real details of how engineering issues were overcome.
This is well written book giving broad brushed commentary on challenges that were overcome; unfortunately the title suggested to me something rather different. Change the title and it's a good book but if you are looking for something specifically about engineers, engineering, etc, I would suggest looking elsewhere.

great narrative with enthusiasm. subject well presented and tied together. well explained and removes the traditional emphasis on single campaigns or personnel to the knitted together progress made by development and the expensive human cost..