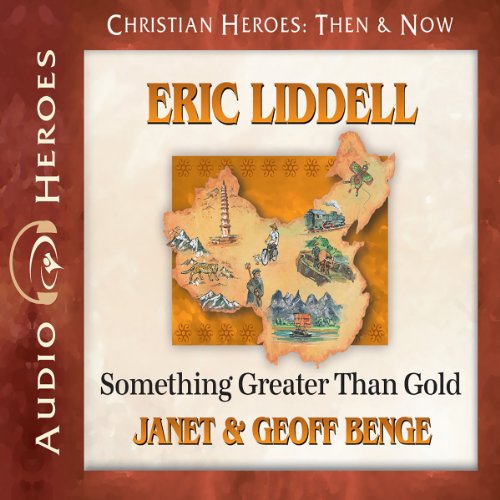 Eric's (1902-1945) refusal earlier that week to run on Sunday in the Olympic 100-meter race had stunned the world. Now his incredible victory in the 400-meter race further strengthened his believe in God's promise, "He who honors Me, I will honor." Years later, Eric Liddell would be tested far beyond mere physical ability as a missionary to China. His character, perseverance, and endurance are a challenging example for all who would obey the call to bring the gospel to the nations.

What listeners say about Eric Liddell

Great story and easy to get through in a day

There was no struggle to finish this one. Great story material and the reader made for easy listening. I enjoyed the story - worthwhile if you like biographical stories like Boenhoffer, Hudson Taylor, or Brother Andrew.

We listened in a classroom setting. Some sections were slow but the ending was quite emotional but good. Overall we enjoyed it.

My children and I loved it. Eric Liddell is an inspiration to us all!

this book was so good and well told. I'll be getting more of these! thank you

Although this is a short history of Eric Liddell, it's a must listen. I kind of knew that Eric was a national hero in Scotland and the UK at that time, but clearly I didn't know how much of a hero. I definitely did not know the extent of his Christian testimony to the world and to the Christian world. I am so glad that I bought this and learned the rest of the story.

We knew who Eric was but after listening to this we now feel like we REALLY got to know him. it was so excellent in giving so many wonderful details.

I felt like the narrator did an amazing job at bringing me in. This story, though fairly well known in part, is so compelling and moving. It has made me want to really hone in on my own purpose and my own srrengths, even if they only make a difference in my family.

This audible version has been prepared for people who haven't got much time and would still like to get the gist of a story. The subject matter is exquisite of course. Eric Liddell was a hero whichever way you look at his life. The China end of the story needs to be told and heard because it creates a window to view what was going on in Asia at the time - the tragedy of it - but also to see the way one person can make a huge difference if they know why they are there and what is most important. A great listen