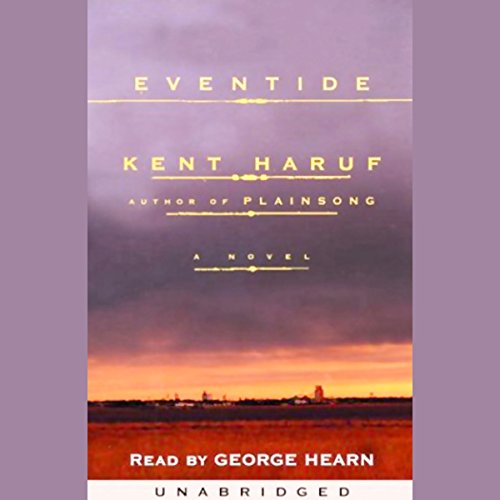 One of the most beloved novels in recent years, Plainsong was a best seller from coast to coast, and now Kent Haruf returns to the High Plains community of Holt, Colorado, with a story of even more masterful authority.

When the McPheron brothers see Victoria Roubideaux, the single mother they'd taken in, move from their ranch to begin college, an emptiness opens before them, and for many other townspeople it also promises to be a long, hard winter. A young boy living alone with his grandfather helps out a neighbor whose husband, off in Alaska, suddenly isn't coming home, leaving her to raise their two daughters. At school the children of a disabled couple suffer indignities that their parents know all too well in their own lives, with only a social worker to look after them and a violent relative to endanger them further. But in a small town a great many people encounter one another frequently, often surprisingly, and destinies soon become entwined (for good and for ill) as they confront events that sorely test the limits of their resilience and means, with no refuge available except what their own character and that of others afford them.

Spring eventually does reach across the land, and how the people of Eventide get there makes for an engrossing, profoundly moving novel rich in the wisdom, humor, and humanity for which Kent Haruf is justly acclaimed.

"In the hands of another writer these events might read like a hick town soap opera, but Mr. Haruf's understated prose, combined with his emotional wisdom and his easy affection for his characters turns these events into affecting drama." (The New York Times)
"Highly charged and compassionate." (The New Yorker)
"Haruf's storytelling at its best." (Entertainment Weekly)

This is a wonderful book, well read. The characters and their world will engage you, and leave you wanting more. Elegantly and sparely written, with dialog that sounds both real and just right. It picks up where Plainsong leaves off, with some of the same characters. I was sorry for the book to end, and hope the series continues.

What this book imparts is a quintessential view of American agrarian working class people. It is set in Colorado and speaks of small town life, I would guess in the 1970s or 80s. (One family has a microwave.) It is not plot oriented, so if you want lots to happen, look elsewhere. The picture it draws is astoundingly perceptive. The characters have very ordinary lives, but it is the perfection with which they are drawn that is so fantastic.

I cannot think of another book that delivers such astoundingly perfect dialogs. The sentences are short. What these characters say to each other is what ordinary people DO say to each other. The sentences are often composed of one or two words, or just a phrase. The dialogs are varied – between two elderly brothers, between the husband and wife of a family on welfare, a social worker and those she is trying to help, between children, between friends and enemies, the rants of a child abuser. Absolutely all of these dialogs are pitch-perfect. Either Kent Haruf, the author, has a fantastic memory for conversations he has heard or he has used a tape recorder.

The narration by George Hearn, could simply not be better. He delivers the dialogs with perfect pacing. His pauses speak volumes.

This book is the second of a trilogy. The first one is "Plainsong". I read that years and years ago and gave it too four stars. "Benediction" follows “Eventide”, but I have not chosen to pick that up immediately. I want to explain why because I believe it says something about what you can expect from this book. I need a break; I can take only so much. While there is subdued humor in the lines, the book essentially shows the struggle of daily life for many, many ordinary people. Their lives do have moments of happiness. The nice things are rather mundane, but still very beautiful….but maybe you have to look hard to see them. Also, the audiobook format of “Benediction” has a different narrator, and I absolutely cannot imagine listening to a similarly told story with a less competent narrator. The three books are stand-alones; they do not have to be read together, so I will wait! This was so special I don’t want to lessen my appreciation of it with another.

Have I explained properly so you know what this book offers you? Great writing about ordinary people. Superb dialogs. You will come to love some of the characters. For me it was Raymond.

At one time in my life I lived in a Western Nebraskan town with a population of 426. Perhaps it is because of this experience that I love Haruf's books so much. He captures the pace, the complexity of its seemingly simple characters, and the neverending amount of sympathy that small town folk typically have.

I'd compare Eventide and its predecessor, Plainsong, to Cold Mountain or writing by Barbara Kingsolver for the way they all create character studies that convince us we have real, living feelings for these people.

I do wonder, though, how important it is to have read Plainsong first, the book that gets you to appreciate the amazing bond between the some of the main characters. Nevertheless, this book is worth your time-- it'll help you grow as a humane individual.

I read and enjoyed Plainsong, the first book in this series. I found the audibook sequel even more engaging, partially because of the excellent reading. As another reviewer has stated, I really cared about the characters. The author is an astute observer of human nature, a talented painter of word-pictures, and an excellent storyteller.

A great way to end a day.

I fell in love with these characters in the author's other book, "Plainsong". It was such a joy for the story to continue. Just a good old fashioned good book - not full of fluff and yet not too heavy to tire you out.

I agree with another review I read that in other hands, the story would be soap opera, or maybe horse opera. Instead, this book is just what my title says: deep and simple.

The language is not flashy, though sometimes simple words combine to present startling images of the sere, difficult country in which the story takes place. The characters are not described in psychologically complex terms, but behave in ways which engaged my my belief and my very complex emotions.

The reader, George Hearn, matches his presentation to the material beautifully.

Love this author! Would love for him to write more. Read 'Plainsong' first though it will make more sense.
These books made me laugh and cry, which in my opinion is a very good experience.

No great drama but very authentic day to day life.

Would you consider the audio edition of Eventide to be better than the print version?

What was one of the most memorable moments of Eventide?

The death of one of the brothers.

Have you listened to any of George Hearn’s other performances before? How does this one compare?

Not quite as enjoyable as Benediiction

If you could rename Eventide, what would you call it?

Where does Eventide rank among all the audiobooks you’ve listened to so far?

I read Plainsong first, and its story about a small town and an earlier (though not necessarily simpler) time drew me in. By the time it was finished I found myself wanting more--right away! Fortunately for me, Eventide picks the story up again. It isn't exactly a sequel, but is set in the same small town with some of the same homespun but highly engaging characters, working with challenges of loneliness and loss. Not exactly haunting in its beauty, but definitely one that will stay with you for a while.

First of all, if you haven't read Plainsong, start there. It is a wonderful wonderful prelude to Eventide. Both books are lovely, moving stories. The author has a very spare style that is really wonderful. I LOVE both of these books and they are both highly recommended.

I have now read the Trilogy, consisting of Plainsong, Eventide and Benediction.
The titles practically illustrate the novels . Beautifully Sparse in their storytelling of a small American town and a handful of their inhabitants. People with few words and simple hard working lives, go about their daily toils and we are drawn deeper and deeper into them ourselves, so much so that you care desperately how things are going to turn out. I wanted the trilogy to go on and on!
Reading these books makes you feel hopeful about humanity.

What other book might you compare Eventide to, and why?

Which character – as performed by George Hearn – was your favourite?

He read it brilliantly. His pace matched the feel of the book.

Read or listen to them. A must.

Touching, beautiful relationships, not to be missed. 2nd in trilogy. Onto the last one,now and can't wait.

George Hearn narrated this perfectly. The story is beautiful too and the writing is so spare and subtle, I loved it.