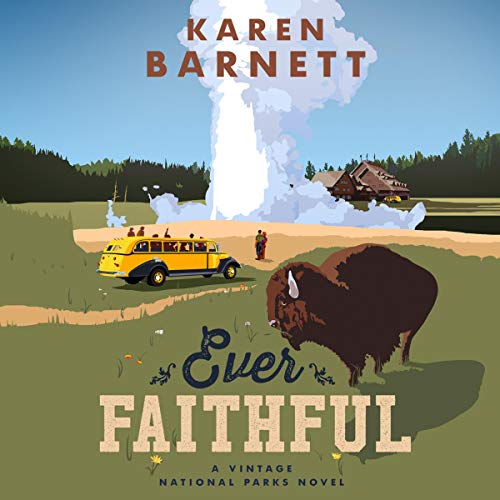 A man who can't read will never amount to anything - or so Nate Webber believes. But he takes a chance to help his family by signing up for the new Civilian Conservation Corps, skirting the truth about certain requirements. He exchanges the harsh Brooklyn streets for the wilds of Yellowstone National Park, curious if the Eden-like wonderland can transform him as well.

Elsie Brookes was proud to grow up as a ranger's daughter, but she longs for a future of her own. After four years serving as a maid in the park's hotels, she still hasn't saved enough money for her college tuition. A second job, teaching a crowd of rowdy men in the CCC camp, might be the answer, but when Elsie discovers Nate's secret, it puts his job as camp foreman in jeopardy.

Tutoring leads to friendship and romance - until a string of suspicious fires casts a dark shadow over their relationship. Can they find answers before all their dreams go up in smoke?

What listeners say about Ever Faithful

A lovely clean romance with a historic Yellowstone in the background.

The characters in this book were slowly developed until you felt very comfortable with them, and the background of Yellowstone was woven into the fabric of the story. Very well preformed. A lovely clean romance story set in a historic setting. I enjoyed it thoroughly and plan to read the rest of the series.

The narrator did an excellent job reading this story set in Yellowstone in 1933. The story was skillfully written and the characters deeply layered. Our heroine has been working to save up money to go to college and become a teacher, and meanwhile an illiterate New Yorker joins a government program in order to have a job during the Depression. I loved the setting and the characters won my heart.

Great story, clean romance not too preachy and with a truly unique historical setting. Good narration and well paced story

I love that this book was set in Yellowstone and the Civilian Conservation Corp period.

You don't see this kind of backdrop very often -- the story takes place in Yellowstone National Park, and the characters are park rangers, hospitality workers (maids, bus drivers, and reception workers), and men in the CCC (Civilian Conservation Corps, established by Roosevelt in the early 1930s). For once, no millionaires, billionaires, doctors, lawyers, princesses, dukes, or other unrealistic protagonists! No cell phones, social media, or selfies, People have real jobs and real problems. The main female character is smart, loyal, and resourceful, and has a plan that doesn't necessarily depend on a man or anyone else to take care of her! And the male character, from a lower class family in New York, endeavors to support his parents and siblings back home with his humble paycheck. Both have painful baggage in their respective histories, and in the course of the story, succeed in resolving them.

The narrator was rather good. She differentiated voices and timbres (even doing male voices pretty well), and made an attempt with accents (although less successfully). Anyway, I would be open to listening to more books by this reader again.

Yellowstone in the 1930s

The third in the Vintage National Parks Series is just as wonderful as the first two. These books are addicting, so I surely hope the author continues, as they are making me want to venture out to the National Parks! The stories are great, clean and more than that, they tell the tale of how our National Parks began, flourished and were preserved. The descriptions of the flora and fauna are absolutely first rate. The relationships between the park staff and the support staff that work at the hotels and attractions are intriguing and never boring. The story of Nate Webber, the city boy from Brooklyn, who wanted to provide for his family and keep his younger brother out of trouble, is heartwarming. He, along with the other Civilian Conservation Corps that traveled cross country to Yellowstone National Park and other places, were forever changed by their experiences. Elsie Brookes, the daughter of a park ranger, who worked as a maid at one of the park hotels, trying to earn enough money to go to college, hid a secret from her past and didn’t let many close to her. But her last summer at Yellowstone before leaving for school would change Elsie’s and Nate’s lives forever . . . as well as many of their friends and families. The combination of mysteries, every day lives, the National Parks and the history make this series a must listen/read. The resolution and ending are always worth the wait. BRAVO for another excellent addition!

I really enjoyed this book. I was so neat to find out what it was like at Yellowstone in the 1930;s. I have learned so much about the staff of the park and the CCC. I knew a bit about the time period, but it has been really interested in finding out about the park and learning it from the perspective of characters who were "there".
I really liked Nate. It was hard seeing him want to keep his secret and how he handled it in the end. I really have been enjoying this series and love the originator as well.

Ever Faithful, Ever Fantastic!!!

A fantastic story set in 1930's Yellowstone! I loved getting to know the "savages" and the CCC crew!
This book placed me right in the midst of the action. Inside the inner workings of park employees. I feel like I could sit down and talk to the characters as if they were friends. (I love it when that happens.)

Rich characters, romance, history, and mystery all in one very good book. The excellent narration is a bonus.
I highly recommend Ever Faithful by Karen Barnett!
* June 2020 I couldn't resist the Kindle sale. I love to read and listen!