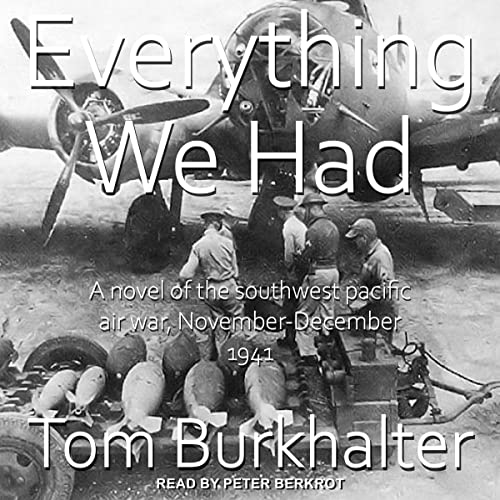 November 1941: War is coming to the Pacific.

In Europe, the Nazis are triumphant. England is under siege by air and sea. France has fallen to the Nazi Wehrmacht, which in turn fell on Soviet Russia. The Red Army is in full retreat, with the Nazis at the gates of Moscow.

In the Pacific, Japan has been at war with China since 1937. Her war industries depend upon imports of scrap metal and oil from the Allied nations. When an embargo is placed on imports to Japan, they are left with a year's supply of oil to supply their armed forces.

Japan surrounds American possessions in the Philippines on three sides. The US Army is making a desperate, last-minute attempt to reinforce the Philippines garrison, but the clock is ticking for the Japanese, with their oil running out. The armed forces of Imperial Japan may attack the Philippines at any moment.

Two brothers, Jack and Charlie Davis, are pilots in the US Army Air Forces. They are part of the reinforcements sent to the Far Eastern Air Force, charged with air defense of the Philippines.

For Jack and Charlie, in a time when the US is on the brink of world war, a simple question must soon be answered: What will I do when the Japanese come?

"Brilliant! The books that are part of Tom Burkhalter's No Merciful War series are, without exception, rare gems that are entertaining, historically spot on, and a joy to read. Tom has not only created a cast of characters who are as real as the officers and enlisted men I have had the privilege of serving with, he leaves you wanting to see more of them. Even more impressive is his ability to succinctly depict the tactical and technical aspects of aerial combat. A must read for anyone interested in the Pacific War when victory was far from certain." (Harold Coyle, author of Team Yankee, for the No Merciful War series)

What listeners say about Everything We Had

As Good as a WEB Griffin War Story

Finally, I have listened to a war story that matches the master in this genre; WEB Griffin. I order this audio-book yesterday and finished the next day. The only weakness is that audible doesn't have the next book in the series ready to order.
Not only is it a great story; but the novel is rich in its Characters. The story is about two brothers; one a Army Air-force Captain who is a graduate of West Point who commands B-17 and the younger brother who is a (pursuit) fighter pilot. Somehow, they both end up in the Philippines just before WW II starts. This story is really two stories of the two brothers making their mark in a newly expanded air-force in a country that was not prepared for the Japanese invasion. However, the author seamlessly bring the two brothers together throughout the story.
I was impressed with the knowledge that the author has of the planes involved in the narrative. It makes the story believable.The quality of the audio recording enriched this riveting story. I can hardly wait for the second book to be released in audio.