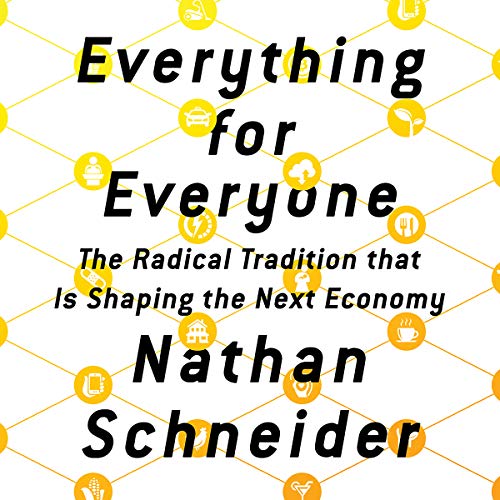 The origins of the next radical economy is rooted in a tradition that has empowered people for centuries and is now making a comeback.

A new feudalism is on the rise. From the Internet to service and care, more and more industries expect people to live gig to gig, while monopolistic corporations feed their spoils to the rich. But as Nathan Schneider shows through years of in-depth reporting, there is an alternative to the robber-baron economy hiding in plain sight; we just need to know where to look.

Cooperatives are jointly owned, democratically controlled enterprises that advance the economic, social, and cultural interests of their members. They often emerge during moments of crisis not unlike our own, putting people in charge of the workplaces, credit unions, grocery stores, healthcare, and utilities on which they depend. Co-ops have helped to set the rules, and raise the bar, for the wider society.

Since the financial crash of 2008, the cooperative movement has been coming back with renewed vigor. Everything for Everyone chronicles this economic and social revolution - from taxi cooperatives that are keeping Uber and Lyft at bay, to an outspoken mayor transforming his city in the Deep South, to a fugitive building a fairer version of Bitcoin, to the rural electric co-op members who are propelling an aging system into the future. As these pioneers show, cooperative enterprise is poised to help us reclaim faith in our capacity for creative, powerful democracy.

"Everything for Everyone lives up to its title. This is no paean to the neoliberal 'gig economy' but rather an historical and contemporary tour of the radical potential of cooperative economics to disrupt capitalism as we know it. It is a book for everyone and a book for our times: read it, share it, but don't just talk about it. Commons for all!" (Robin D. G. Kelley, author of Freedom Dreams: The Black Radical Imagination)

"A gifted writer, chronicling the world he and his compatriots are helping to make - spiritual, technological, communal." (Krista Tippett, host of NPR's On Being)

"Everything for Everyone proves how our vested interests are best served by addressing our common ones. In Schneider's compelling take on the origins and future of cooperativism, working together isn't just something we do in hard times, but the key to a future characterized by abundance and distributed prosperity. We owe ourselves, and one another, this practical wisdom." (Douglas Rushkoff, author of Throwing Rocks at the Google Bus)

What listeners say about Everything for Everyone: The Radical Tradition That Is Shaping the Next Economy

One of the best books I’ve ever read. Everyone should read or listen to this.

This is a masterpiece that everyone should read, regardless of their political leanings.

This book/audiobook is one of the best I’ve ever listened to. Even with a background in economics and a deep understanding of history, I found the historical insights in this book new and very useful. The author also does a great job tying them to the current Gig economy.

The Gig economy isn’t a sharing economy, it is really more akin to feudalism.

As Nathan says, joint stock owned companies / corporations are a relatively new invention, only about 150 years old in their current C Corp form. Cooperatives on the other hand have been around for thousands of years. We need to reset our culture to favor starting long-term cooperatives versus short term Venture Capital-backed get rich quick schemes.

If we want to fix American democracy, we need to make capitalism more democratic.

focused on the digital rebellion

I mostly enjoyed the book, but the message is more one of creating a potential revolution as opposed to a cooperative. Matt does a great job introducing the topic of coop's but then gets lost in the digital counter culture getting bogged down in the more revolutionary aspects of cooperatives. Humanizing The Economy has a richer description of coops and the their post www history and I would recommend Humanizing The Economy first and Everything for Everyone if you have a fascination with the digital side of cooperatives (open source software, blockchain, digital management tools).