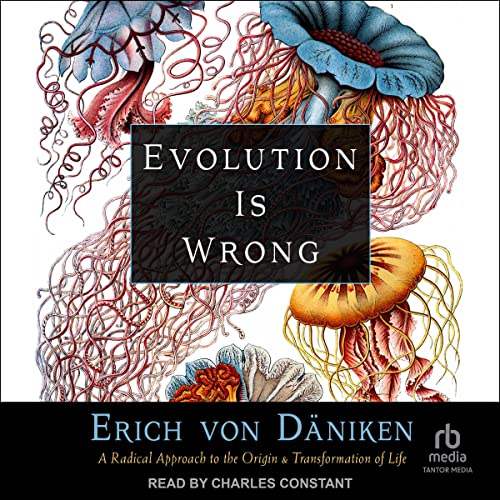 Everywhere there are characteristics of animals that do not want to fit into the theory of evolution anywhere. And man? Are we really the most adapted life-form on this planet? Today, more and more scientists who contradict the previous theory of evolution speak out. The theory fits the changes within the species, but it can no longer be reconciled with the inner workings of the cell. Some other influence that has so far escaped us is affecting evolution. It is called "Intelligent Design." Intelligent planning is suspected behind this. Anyone or anything—a spirit of the universe? aliens?—could be behind this planning.

In this must-listen book, Erich von Däniken uses countless examples to demonstrate the impossibility of the previous evolutionary idea. He quotes scientists who argue against the previous teaching, but also those who defend it. Unfortunately, established science still refuses to look at discrepancies and holes in the theory of evolution, even though it is quite obvious that there is more going on with regard to the development of all species, as well as human culture, than could be explained by the theory of evolution alone.

What listeners say about Evolution Is Wrong

this book is quick and easy. It raises good questions, there are no real solid answers but that's not it's job. I found it very interesting.