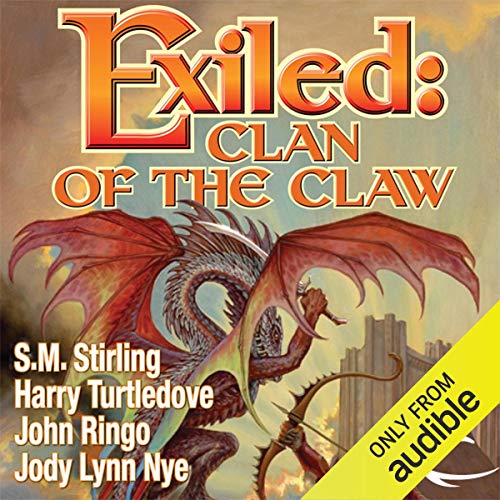 After the extinction asteroid doesn't strike Earth, the dinosaurs keep evolving... but so do the mammals. We mammals have achieved human-like shapes, but now it's cold-blooded, magic-using reptiles against the hot-blooded, hot-tempered descendants of cats.

In a heroic, bronze-age world similar to 300, the Mrem Clan of the Claw and its sister warbands are expanding their rough-and-tumble territory, but now they face the Lishkash, masters of a cold-blooded empire of slave armies and magic. It's mammalian courage and adaptation against reptile cunning in a clash of steel and will that will determine which line shall inherit the Earth.

What listeners say about Exiled

Wanted to love it

This collection of novellas had an interesting premise; the dinosaurs were never wiped out and instead evolved into powerful intelligent beings with mental powers they refered to as magic. On the other side of the spectrum cats also evolved into a tribal society with their own much weaker mental powers. Of course both of these different species hate and loathe each other and the stories presented here are about battles and other conflicts between the two. I did finish all the novellas and there good times to be had, however, there is little to no cohesive connections between each respective story, and each author put their own personalized spin on each character introduced, making it difficult for me to relate or even enjoy the struggles depicted. Also the narrator was incredibly bland with almost no distinguishing characteristics between the protagonist and antagonists. I recommend passing on this one.

Stirling and Ringo one book

What would have made Exiled better?

What would have made Exile better? Anything. While I love Ringo and Stirling is okay this book was a disaster from the first word.

Enjoyable set of stories with lots of excitement and drama.

The only problem being that some of the culture between the stories seems to be a little inconsistent but hopefully there will be better communication between the authors for the next one.