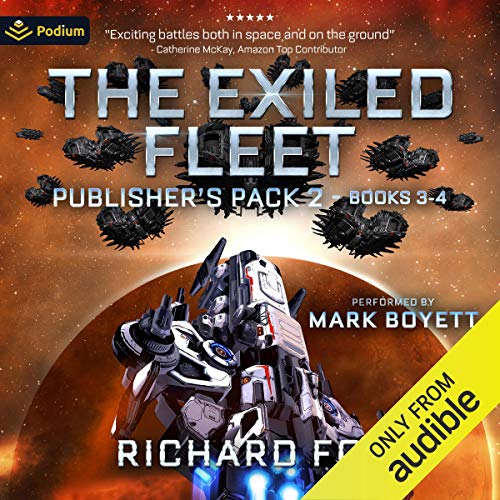 Contains audiobooks three and four of the Exiled Fleet series.

The Exiled Fleet tried to escape the evil Daegon. They fled into a trap.

The last free Albion fleet finds temporary sanctuary over a friendly world, but when the Daegon invasion arrives, there is no escape for Commodore Thomas Gage and the last member of the royal family he’s sworn to protect. With their backs to the wall, a glimmer of hope breaks through the besieging Daegon. Lady Christina, a possible heir to the throne arrives, but with her comes the question: Who has the right to lead Gage's forces?

Amid the schisms opening in the chain of command, Gage will fight to protect young Prince Aiden from the obsessed hunter Tiberian, who has vowed to return the boy to occupied Albion...dead or alive.

Gage and his allies learn dark secrets of the Daegon invasion....

When the Exiled Fleet enters the Cathay Empire, Commodore Gage must confront an awful truth. Albion ships have joined the enemy invasion. With an alliance to liberate the home world in doubt, Gage leads a mission to bring the renegades to account.

But will Gage lose everything to protect Albion’s honor?

Meanwhile, the spy Tolan sneaks back to Daegon territory and witnesses just how the Daegon rule conquered worlds. There, he finds information that can win the war for Albion...or plunge the free galaxy into darkness.

The Exiled Fleet series is a military space opera by the Dragon Award-winning author of the Ember War Saga. If you want action packed space battles, intrigue, and fights between cyborg warriors, this is the story for you! Listen to this epic space fleet audiobook today!

The series started out great then dragged

Book 1 was awesome in my opinion, it grabbed your attention, book 2 was a good as well, however in book 3 I started feeling the story was being dragged on, by adding unnecessary politics which continued to book 4. The ending of book 4 was really disappointing. Now I wonder if the author is planning on dragging book 5 out with long drawn out politics or finally getting on to the task at hand. I get enough politics from Facebook and the news.

Was a 5x5x5 star review, until the very end

This audiobook is the second publishers pack, book one is excellent, had I written my review then it was 5 stars across the board, book two is very good, until it ends in a freaking cliffhanger, which frustrates the hell out of me, I waited two years for books three and four, With my whining concluded, book two also has great action, great villains, great pace, shit ending, yet, I can’t wait for next installment, the second book does come to a gratifying end, then “it” happens. Anyone who enjoyed the genre, Mil Sci Fi fans, it’s definitely worthy of a credit

great book and excellent story. Once again it ends in a cliff hanger leaving you wondering if there will be a book 5 and how the story will end.

As a trucker monotone books spell death! This book has the characters coming to life with voices and the action packed novel sucks you in! I had a hard time stopping it at the end of my shift to save some for later! Very addictive and satisfying!

great series! I enjoy all of Richard Fox's books. I have been waiting for these for awhile

Absolutely gripping and entertaining from beginning to end. The only complaint I have is that every book is left as a cliffhanger. stuck waiting for book 5 now.

I would rate Publisher's Pack 1 a solid double down the first base line with this pack a well placed triple just shy of the fences and brings pack one in for a run. Richard Fox created some of the more creative characters I've encountered in SciFi in quite a while. There are galaxy-outlawed Faceless who, through genetic experimentation allows them to reconfigure themselves to anyone they've acquired a DNA sample of. This trait allowing them to act as perfect intelligence operatives and assassins behind the scenes. Then there are the antagonists who are genetically-modified humans whose goal is to dominate the galaxy by any means necessary which often involves killing millions of people in their pursuit and no hesitancy to kill a whole planet if the people offer too much resistance to total compliance. The origin of these humans suggests that they came from a place of power on earth back in the 18th century but left unclear as to the specifics so, perhaps, either the Illuminati or the Masons?

Lots of twists and surprises are revealed and the author moves the overall story froward well and a cliff hanger at the end that would seem to put the progress of restoring Albion in significant doubt.

Mark Boyett provides the listener with a superb audio performance.

There has better be more books. That ending was not cool. Otherwise it was a great book

Richard Fox knows and presents real military science fiction. This is a great series. I hope he continues with this series because he is a master world builder.

A refreshingly interesting, nay, gripping tale from a great pair of author and narrator that will keep you listening and waiting for the next!

have really enjoyed the series. battles scenes were well told and held my attention. really hope book 5 is coming soon.

This is the best military sci-fi I've read since David Webers Honor Harington books I am so hook on this serise that I can not wait till the next set of books is out.

Enjoying the story so far

I have quite enjoyed listening to this series of books and I am looking forward to the next instalment.

You have to listen to it

Space-Ships In a Battle Torn universe

thoroughly enjoyed this series and can ot wait for the next installment, I could not tear my self away from it and it impacted my daily life as I just had to keep gorging on it 🤤🤣🤣

Wow!! definitely got My imagination Going

The first book I actually finished And now a series on Audible, I loved the characters especially the commander of the castle itter, and the escapades of tolan could be a series on it's own

The only problem with the book/series is there isn't a 5th I'm hoping for many more, it's like the story's only getting started