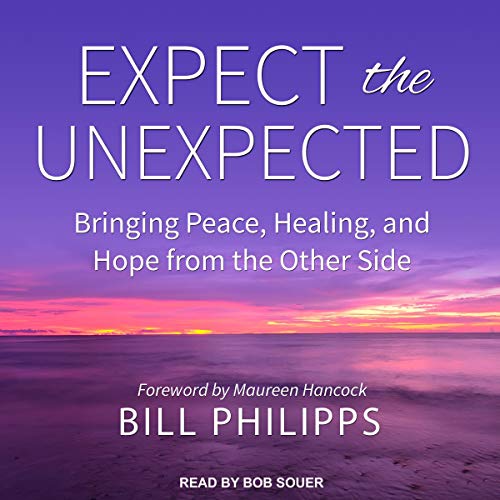 Bill Philipps had the kind of childhood that seems too tragic to be true - drug-addicted parents, parental kidnapping, homelessness. At 14, he watched his mother die. Two days later she appeared to him, letting him know she was spiritually alive. From then on, spirits "knocked on his door."

He tried to ignore them. He wanted to be "normal." But as he pursued his singing gift at the San Francisco Conservatory of Music, his psychic gift pressed for a hearing. As Philipps gave readings as a psychic medium, witnessing the comfort the spirits offered, he came to accept and honor his abilities.

With testimonies from many people, Expect the Unexpected is an honest firsthand account of how spirits communicate with Philipps, why he believes they chose him to do this, and how he works with them to ultimately convey their messages. He offers insight and suggestions to help ask for and receive signs with or without a medium and shows why he is convinced that readings always contain the possibility for love, peace, healing, and hope.

What listeners say about Expect the Unexpected

Not quite what I expected

This is not what I expected. The narrator was boring. I finished the book though. There were a couple of chapters interesting but much of it is story telling.

I really liked this book. However, the narrator was all wrong. He has a great voice... just not for this book. It’s very formal and almost robotic. It became very distracting for me and affected my enjoyment of the book itself. I’d probably advise actually reading this instead of listening to it.

I loved everything about this book! My mom would go to a “medium” a lot but everything said was very vague nothing specific to whom She was looking to connect with. After hearing this book and dealing with all of the deaths in our family lately I will be calling upon Bill to be read. I felt connected and this was the person I am supposed to speak with. Thank you Bill!

It was enjoyable listening to the results of his readings and the things he learned over the years regarding interpretation. I wish it were longer

I believe that this life isn't the end, or a beginning, but more of an experience that my soul seeks for my overall spiritual growth. I don't consider myself a medium but feel I am someone who seems to be in touch with the Other Side...feelings of another presence at times, visions of those I've known as my physical life progresses.

This book helps to validate some of these continuing interests I have of the Other Side, feelings of familiarity, deja-vu and a sense of confidence that who I am today isn't just from the experiences I've had in this life. Much of what Bill Phillips writes in this book aligns with what I have personally experienced, physically and emotionally, as I understand how the Other Side exists.

I would recommend it for those who seek a similar validation, it's written in more layman terms as well and, even though this is my first connection with this author, he seems very genuine, and honest. I hope to possibility experience a reading of his, would be very interesting to see who comes through. I'm pretty sure I know who would, that confirmation would be a very pleasant experience, and of course, highly entertaining for me. 😁

I loved this book! The stories contained within provided validation that Spirit can comfort those through Bill’s gift. I’ve literally listened to it 10 times!

Amazing!, what a remarkable book! after listening to this my scepticism is all time low! Thank you so much for allowing us into your world!

The narrators voice is extremely annoying!

The narrators voice is extremely annoying unfortunately and the story is a bit narcissistic. Would not recommend.

Enjoyed the book, I’m a believing.
This book made my smile. Just knowing my Dad is with me in sprit is the comfort I need.

This book was extremely well written. Bill explained his life developing his gift, the trials & tribulations accepting this gift, and what exactly goes on in his mind as the spirits push for their turn to speak. The narrator, Bob Souer, has a delightfully soothing voice. His enunciation and enthusiasm with words is the best I've heard. Anxious to start Bill's 2nd book.