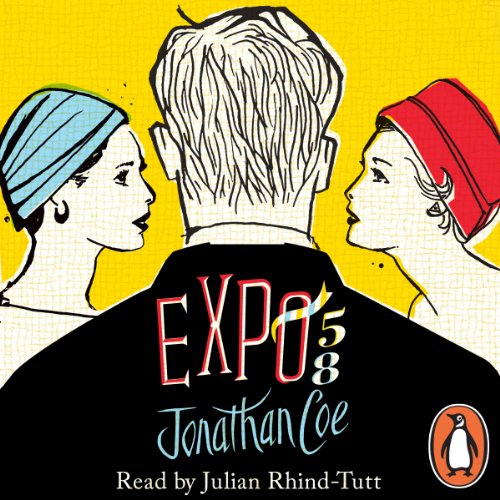 Expo 58 - Good-looking girls and sinister spies: a naive Englishman at loose in Europe in Jonathan Coe's brilliant comic novel. London, 1958: unassuming civil servant Thomas Foley is plucked from his desk at the Central Office of Information and sent on a six-month trip to Brussels. His task: to keep an eye on The Brittania, a brand new pub which will form the heart of the British presence at Expo 58 - the biggest World's Fair of the century, and the first to be held since the Second World War.

As soon as he arrives at the site, Thomas feels that he has escaped a repressed, backward-looking country and fallen headlong into an era of modernity and optimism. He is equally bewitched by the surreal, gigantic Atomium, which stands at the heart of this brave new world, and by Anneke, the lovely Flemish hostess who meets him off his plane. But Thomas's new-found sense of freedom comes at a price: the Cold War is at its height, the mischievous Belgians have placed the American and Soviet pavilions right next to each other - and why is he being followed everywhere by two mysterious emissaries of the British Secret Service? Expo 58 may represent a glittering future, both for Europe and for Thomas himself, but he will soon be forced to decide where his public and private loyaties really lie.

For fans of Jonathan Coe's classic comic bestsellers What a Carve Up! and The Rotters' Club, this hilarious new novel, which is set in the Mad Men period of the mid 50s, will also be loved by readers of Nick Hornby, William Boyd and Ian McEwan. Jonathan Coe was born in Birmingham in 1961. Expo 58 is his tenth novel. The previous nine are all available in Penguin: The Accidental Woman, A Touch of Love, The Dwarves of Death, What a Carve Up! (which won the 1995 John Llewellyn Rhys Prize), The House of Sleep (which won the 1998 Prix Medicis Etranger), The Rotters' Club (winner of the Everyman Wodehouse Prize), The Closed Circle, The Rain Before It Falls and The Terrible Privacy of Maxwell Sim. His biography of the novelist B.S. Johnson, Like a Fiery Elephant, won the 2005 Samuel Johnson Prize for best non-fiction book of the year.

"Coe has huge powers of observation and enormous literary panache" ( Sunday Times) "No one marries formal ingenuity with inclusiveness of tone more elegantly" ( Time Out) "Coe is among the handful of novelists who can tell us something about the temper of our times" ( Observer) "Thank goodness for Jonathan Coe, who records what Britain has lost in the past thirty years in his elegiac fiction" ( Scotland on Sunday)

Enjoyable comic novel that tries to be poignant

If you could sum up Expo 58 in three words, what would they be?

Fun in the Fifties with spies.

If you’ve listened to books by Jonathan Coe before, how does this one compare?

This is the first that I've listened to, but I've read most of the others.. Whilst hugely enjoyable, I wouldn't rate it as highly as the Rotters Club - still his best.

Much of the book is very funny; although some of the plot is predictable and that robs it of its potential comic drama. Some of the attempts at poignancy don't work, but then it's very hard to create a comic character, like the main protagonist,Thomas Foley, and then try and introduce poignancy. It's still good fun to listen to and I would recommend it as a undemanding listen - great for a car journey or a crowded commute.

Would you listen to Expo 58 again? Why?

No - I have not re-listened to anything yet, and could only think that I might with someone heavier-going than this.

Which character – as performed by Julian Rhind-Tutt – was your favourite?

Radford and Wayne were hilarious. I also liked the neighbour.

I liked this book; it had a suitable amount of humour throughout, although I thought the last chapter was unnecessary - I was not really interested in what happened to only some of the characters later in life and thought the book would have had more impact without it. I've found this a bit of a problem with some of Coe's other work - it seems the main body is so good that it can be let down by the ending (What a Carve Up in particular was very disappointing for me at the end). I was also not too fussed about the section when talking about his father (or was it grandfather - I tuned out).

I really liked the narration and would certainly to listen to other books narrated by Julian Rhind-Tutt.

I think I love this book

But I feel I shouldn’t. It’s rather bitty- bit farcical, bit spy story, social commentary, period piece and then later a rather sober rumination on the choices we make.
It shouldn’t be a good read but overall it’s more than the sum of its parts and I think I really like it (although some bits more than others).
And the narration was fab throughout.
Just wish the author’s endnotes were included as now I need to buy a hard copy!

a tale without a twist<br />

Our main protagonist is a little slow in understanding the complexities of the situation and simply follows the most obvious path. It's a simple story, beautifully told. A very easy enjoyable listen. It's not supposed to be complex but I'd have liked a little more intrigue, however, very enjoyable regardless.

I never give 5stars as what's perfection?

Really great listen, had me hooked early on and it's accurate presentation of EXPO58 is both enjoyable and educational.

The lead character is both flawed and perfect, so very human. The description of the ,his main guide at EXPO is beautiful and intriguing and for at least one point (with her and lead) you need to recall this is 1958 England (yeah, yeah I know it's IN Europe).

The introduction of others is done well and with ......... well not going to spoil it so silence on that. I will say maybe the end is rushed however it does bring it all together, we are left in no doubt.

The fact that the reader only gets a mention in passing and at the end should make it clear he did his job so very very well.

Coe back to his best.

What I love about Jonathan Coe books are that you are always able to relate to the characters and yet feel jealous of them.
This is not only because he manages to make them real but he presents the character with problems that change the way they live their lives. Situations that most of us would love to have been a part of if we were faced with the same dilemma.
All with endings that tie things nicely and reveal the intricacies of the story.
Now to catch up with others I have missed.
Listening is like having my dog again.

I stumbled onto this wonderful book by accident and I am so pleased I did. It's a really great and at times funny story perfectly read.

I enjoyed this book. It was slow to start but gathered pace. There were a number of amusing sections but basically it was a romantic spy novel set in 1958 the year of my birth.

It's a great depiction of life in the 50's and the story is cleverly woven to a fascinating conclusion. The narrator is also excellent.

I enjoyed getting to understand the main character Thomas and the lessons he learned as a result of his actions.

I enjoyed the drunken night, followed by the secret assignation with the 2 absurd English special agents.

If I had the time yes, however it was also easy to dip in and out of

Funny and entertaining but with a darker side too - a bit of everything for everyone!